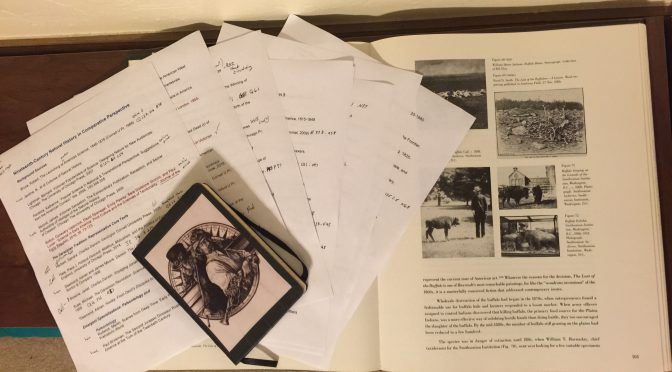 This is the beginning…

Most people will tell you their exams were more nerve-wracking and stressful than their actual dissertation. At least that is what more than a few have told me. Comps, or generals, or just exams (all depending on your field, discipline, proclivities) are the final hurdle to being granted your ABD title. That is All But D issertation.

The hardest part about it for me was the constant comparing of my progress with those around me both in my actual department as well as those I worked with in Art History. Many are fast out of the box and taking exams soon after finishing their masters with some build-up through some independent studies coursework with each of their committee members.  Watching people freak out about their progress isn’t the best way to spend your prep period.

If you take nothing more from this try to remember that your exams just as your dissertation are yours. They will not necessarily looks like anyone else’s. Even if you share committee members with another student their track and yours may be supporting vastly different trains.

I have been working for months on draft reading lists with my committee members in order to construct the most useful background for not only my dissertation but any potential employment opportunities that will hopefully spring forth in the next few years.

The final reading list has been set and I have been gathering up the lat few sources in order to see just what I am up against. Another one of those comparison issues was rendered ridiculous when I talked to another student who entered the program after I did but was reading to take comps before me said that he had an agreed final list approved months ago, but that it had changed a like 8 times. That seems way more stressful to me than waiting a few weeks for a solid list. If you are interested my entire list is posted on this site over under the PDFs section (here).  It looks something like this: 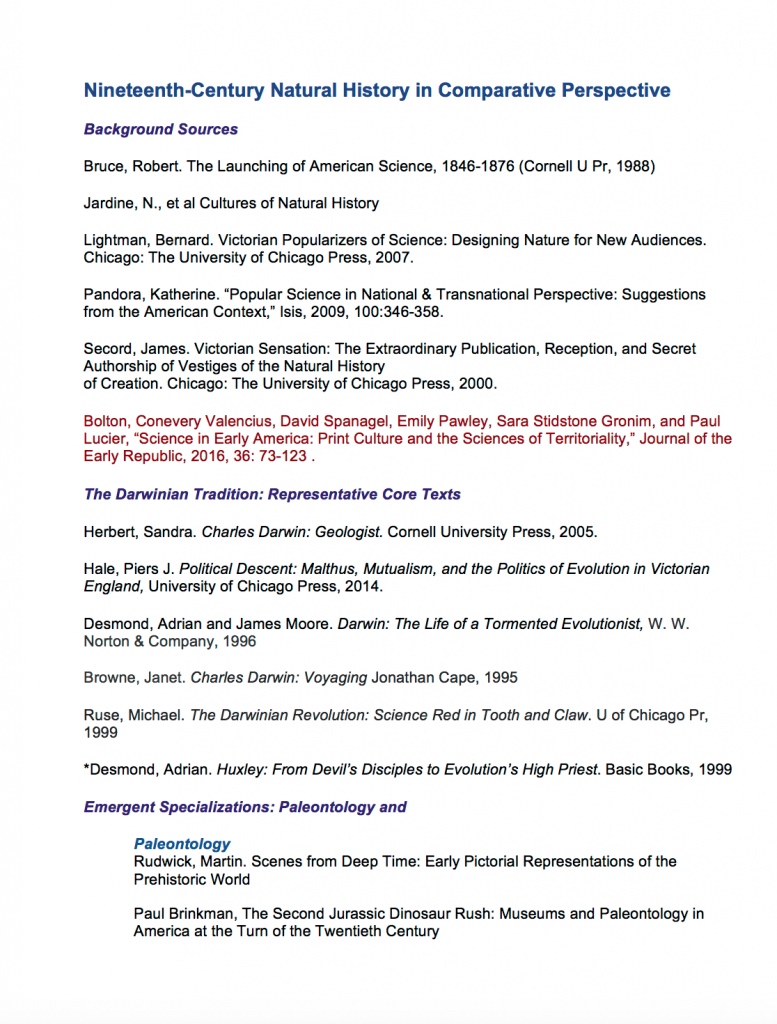 Sorting out how I will be arranging the notes was actually part of the process of list construction. With the example above you can see subheadings under a more general question type. Instead of flooding  the blog section of the site with single book reviews which most would start out apologizing for not blogging the last one, I will have a post for each subsection that will serve to tie the books together and/or compare these established academics’ approaches to questions.

Until then, I will share the filling of the shelves over the last week or so. Luckily the half-shelves are on sale for back to school and I was able to grab a couple on the cheap. Originally I only picked up one because I hadn’t rearranged stuff at the house to put two together somewhere.

The first thing was to wade through the thousands of books in my personal library and see if any of them were on the list. I knew a handful were because they are what steered me into History of Science in the first place. The “already owned” portion actually takes up an entire shelf of the book shelf. Some of these books I have had since 2008 or so, which leads me to believe that I might have been thinking about some of this stuff longer than I actually realized.

The second, more complicated step was to figure out which ones my library owned and which ones I would need to interlibrary loan. Over the last few years our Library search ability has improved greatly. When I first started here in 2012 if it wasn’t an exact match in the system your book didn’t exist, and boolean searches were forms of witchcraft the system did not tolerate. So it was a matter of going through each one and hoping for a local call number.

Then the adventure really begins. Tracking down the books themselves. We have several special collections that are “non-circulating” so any book within that collection you have to access between the convenient hours of 10-5, or some variation thereof. Never after 5. The History of Science collections is one of those. Luckily, only two of the books on my list showed up there. Which should say something about the nature of my History of Science work, or what the collection decides is applicable to the history of science (or, either, neither, or both). One of those has a duplicate in the circulating geology library, and the remaining one had a duplicate in circulating stacks but it is marked as “missing.”  There were also a couple that are non-circulating that are $1.50=$3.00 on amazon, so I will be picking up a copy of my very own.  For any such undertaking a pocket notebook cannot be beat. Especially when you have to carry dozens of these around the entire library because your comprehensive exams are far more comprehensive than you anticipated. 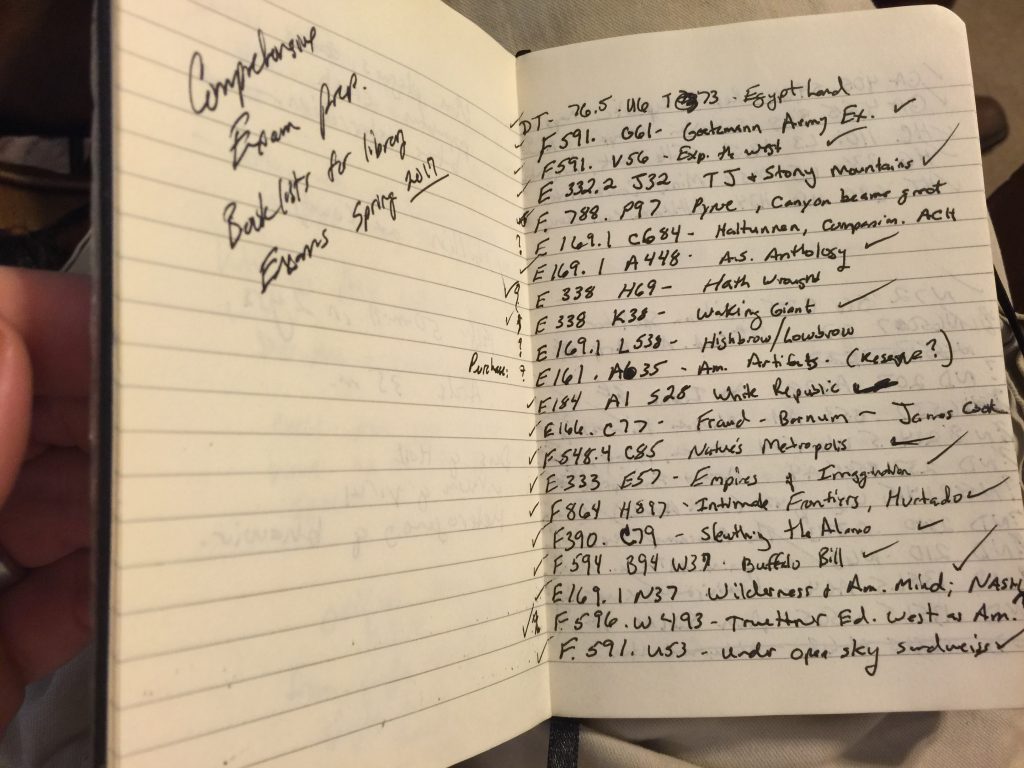 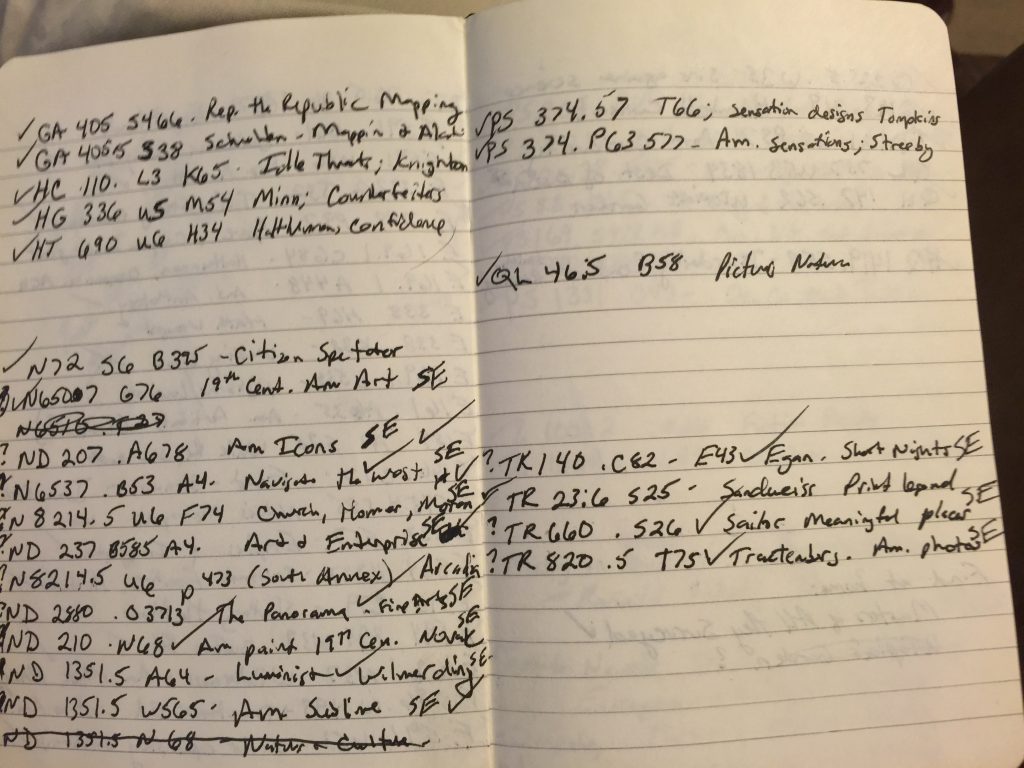 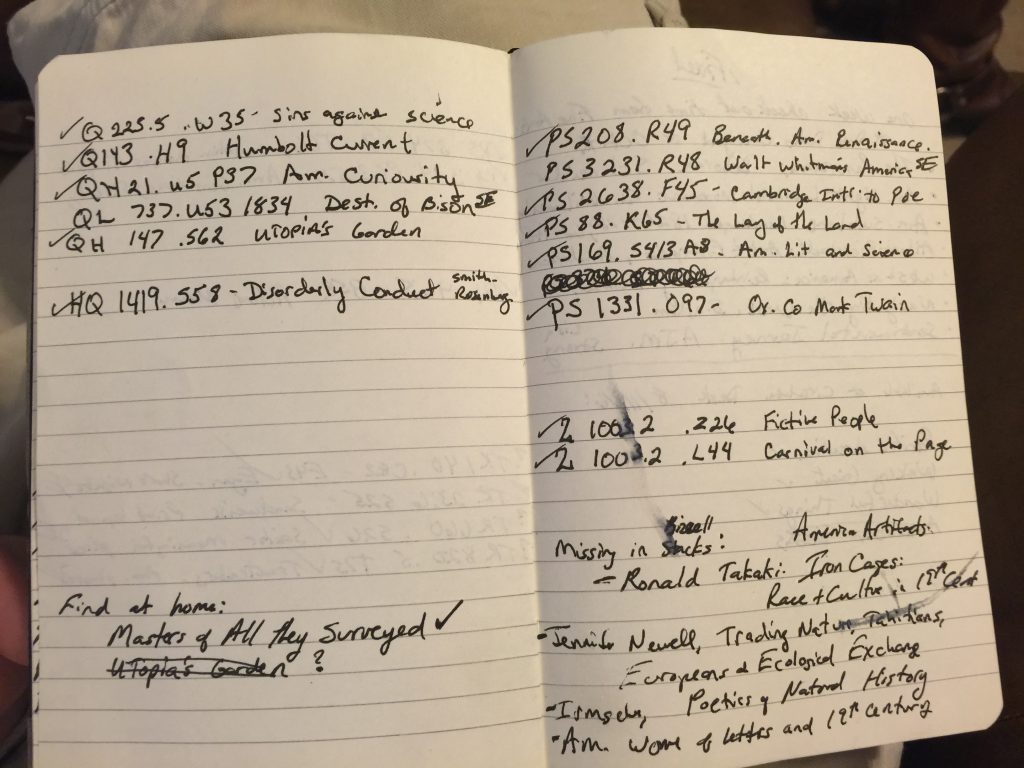 The collecting process includes searching in vain for a book that has been checked out since the last time you checked the library search. In this case you can ask it to be recalled which will shrink the checkout time from months to two weeks from your request. Three of the five I needed were due back on the 19th of August anyway. One was checked out for a year (faculty) and the other no one seems to know.

The stages of gathering are limited by the size of your bag and when you can actually get into the stacks to look. A good portion of my books come from the Fine Arts Library across campus that closes at 5. Luckily we have intra-library loan as well as interlibrary loan and I was able to submit my requests and they were sent over to the main circulation desk in a couple days.

Before the first of the Fine Arts library pulls arrived I had time to expand the holdings into another shelf and move our dogs’ body pillow down a little more. It also means covering up the old phone plates in the living room, but even if we still used landlines, I really need to be reading these books and not be on the phone. 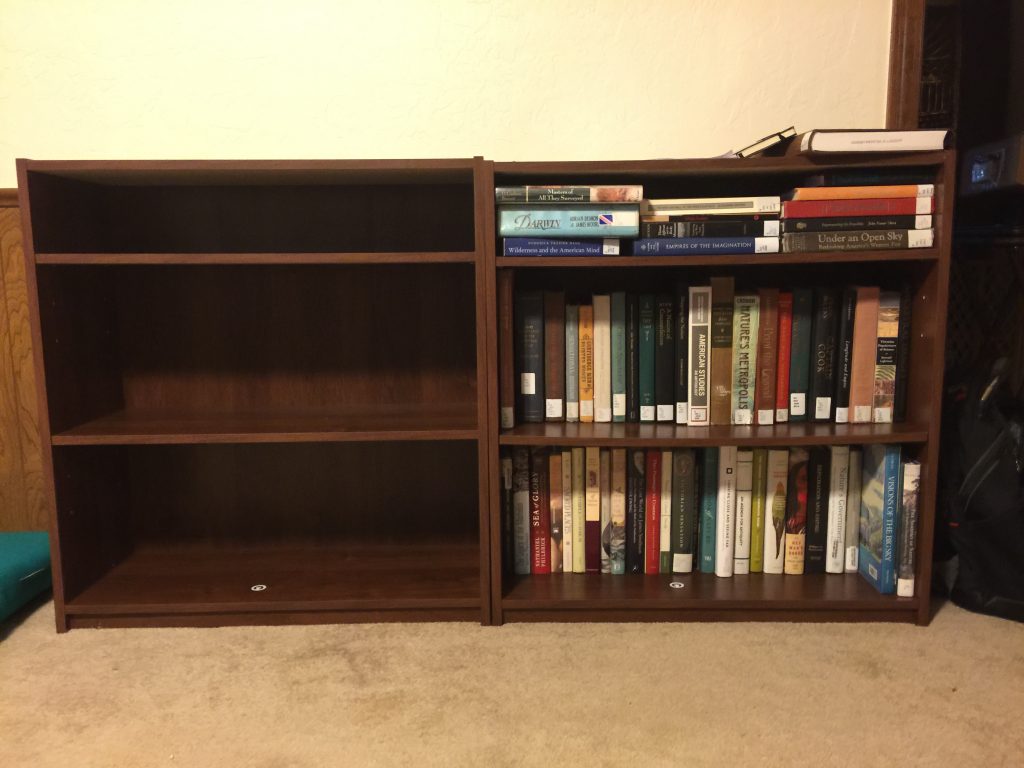 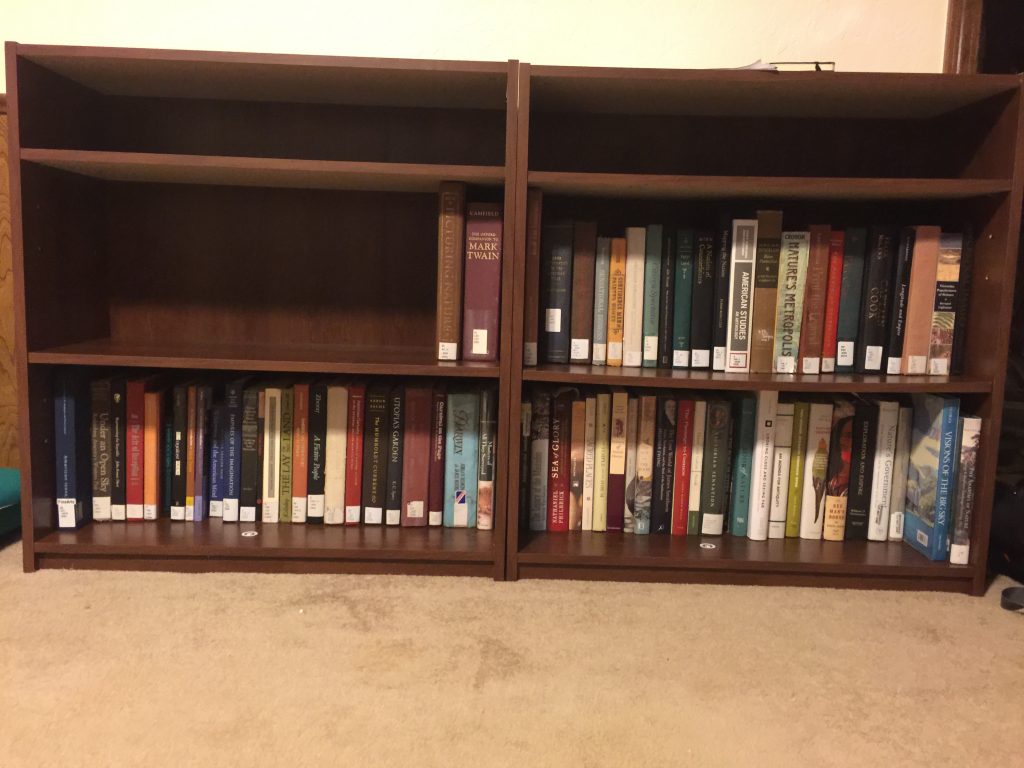 The final pulls from fine arts consisted of several exhibit books that are collections of essays that focus on a specific exhibit of an artists work or a thematic organization. These, and a few others came a day later than the others with a weird limited checkout time of only one week. When I checked on this it turned out that one of those recalls had been placed on them before I checked them out. This was curious as one of them (one on George Caleb Bingham) had not been checked out since the last time I checked it out a year and a half ago (it still had the pull slip from my last borrowing inside). How could someone need it exactly the same time I did. Turns out they had been scanned twice. Either by two separate library workers or by the same one twice. Whatever the case the recall that had been placed on the books I checked out came from myself.  With that cleared up I was able to pick them up and the handful (11) that had to come from other libraries across the US.

The final interlibrary loans came in on Thursday. This leaves a total of 12 books that are on my list that are missing from these two shelves below. Of those twelve I have plans on purchases 8, two of those non circulating ones and 6 that have been on my Amazon wishlist for a couple years anyway so now is the time. The other four are currently checked out to another patron and I will be notified when they are returned and I can pick them up. I will update with a final comps shelf photo with them all together when they come in order to provide a visual for the list that is linked above and what the preparations for comprehensive exams actually look like.

These are in the living room so they can stare at me whenever I am sitting in my chair working on something that isn’t comprehensive exam prep.

It also keeps them together in case some of them get recalled before I am finished with them so I don’t have them strewn across the entire house. I don’t foresee many getting recalled since some of these are pretty archaic and idiosyncratic works that you will have the opportunity to read about in the coming months.

This will certainly be an interesting journey. Just flipping through some of the books I haven’t read before (not every book on this list is new to me), I find people I am intimately familiar with. For example the Albert Bierstadt gallery book fell open to these images and discussion on his last buffalo painting. The context for the photos is William Hornaday and his collection of a buffalo family for the Smithsonian, evan as they teetered on the edge of extinction. We better get them now before it’s too late was the logic. The bison also served as the impetus for a national zoological part in DC that would aid in protecting and attempt to recuperate the numbers of buffalo in the US.* This zoo, and one of its directors, was the focus of my first master’s these at Lamar University.

I hope this is a good omen for this work to be more tying things together than creating all new knowledge. On the up side of things, there isn’t a book on this list that I am dreading reading. Hopefully it will be useful to me to get through comps, and of interest enough for you to come back from time to time and see where I’ve made it.

*yes, I know that bison and buffalo are two separate animals, and they shouldn’t be used interchangeably, however my work looks at most of the 19th century and most of the people I write about called them buffalo so I will too, if you don’t like that I have a marvelous little cartoon by Neil Kohney that I keep handy for just such an occasion: