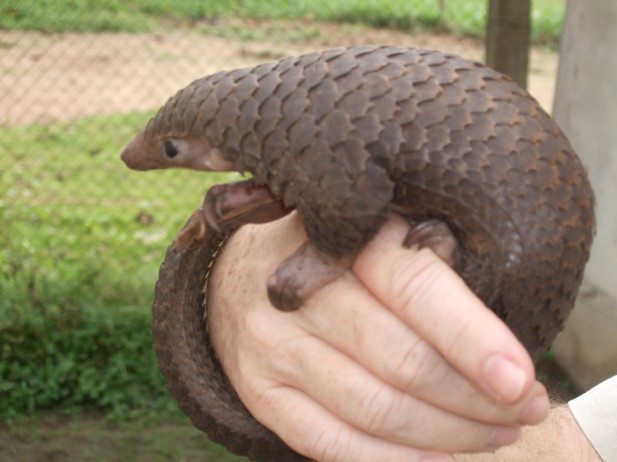 Any time a documentary or nature channel wants to show viewers how weird nature can be the pangolin is bound to make an appearance. The only mammal with scales always shows up in an extreme mammal montage complete with requisite cute video of them rolling into a ball to protect itself. 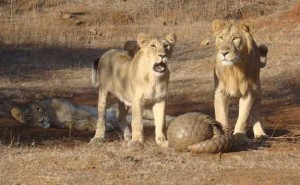 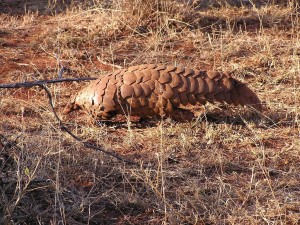 As usual, there is more to the story than that. The 8 species of  “scaly anteaters” are equally distributed across the tropics with 4 species in Africa–The Cape of Temminck”s ground pangoling (Manis temminckii), Tree of African white-bellied pangolin (Phataginus tricuspis), Giant Ground pangolin (Smutsia gigantea), and the Long-tailed or black bellied pangolin (Uromanis tetradactyla)
and 4 in Asia–Indian or thick tailed pangolin (Manis crassicaudata), Chinese or Formosan pangolin (Manis pentadactyla), Malayan or Sunda pangolin (Manis javanica), and the Palawan or Phillippine pangolin (Manis culionensis). Some are arboreal, most are nocturnal, and nearly all are endangered. The terrestrial ones live in burrows that reach 11 feet (3.5 meters) in depth.Lacking teeth, the use their powerful claws to rip open termite dan ant mounds to get at the delicate insect morsels inside. The trouble is, people are doing the same thing to the Pangolins. 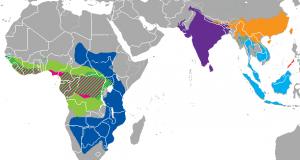 Their front claws are huge. Unlike their larger cousins who walk with their front claws curled under, the terrestrial pangolin waddles on its hind legs with its large tail acting as a type of counterweight. The resulting gait looks something like an old stooped woodcutting dwarf roaming around the forest floor.

A few weeks ago, a Chinese vessel that had crashed into a reef of the Philippines was discovered to have more than 10,000kg of pangolin meat. The Guardian published the article on April 15. Subsequent poachers have been caught in Vietnam, Thailand, and India. 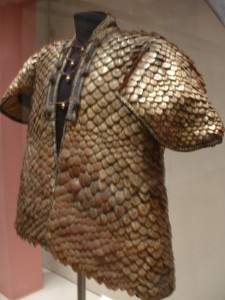 The desire for pangolin scales and/or meat is not a new phenomenon. Back in 1820, King George III was presented with this pangolin scale shirt.

Their scales are made of keratin, the same substance as human hair and rhinoceros horn. Their scales along make up about 20% of their body weight, which depending on species can range from 30-40 pounds (~13.6-18kg)

Every part of the pangolin is in demand. They are hunted mainly for meat, jewelry, and–you guessed it–traditional chinese medicine. The only hard facts that anyone has about the illegal pangolin trade is that it is happening on an alarming, almost incomprehensible scale. 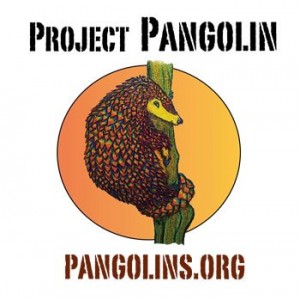 Today groups like the   Project Pangolin are working tirelessly to raise awareness of these endangered animals. If not the most often poached and smuggled wildlife, they are at least near the top of the list. If you are on facebook you can like Project Pangolin’s page, and get updates on your home feed. It’s not all doom and gloom, they share some really great images of pangolins and of the people that work to help end the threat to these guys. 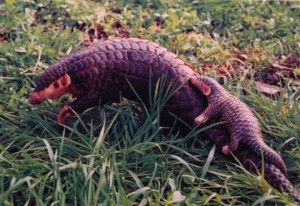 They are being killed faster than they can reproduce. Their gestation ranges from 60 days in some species to
over twice that long in others (139 days). They usually have one pangopup (yes, that is really what they are called) although some Asian species can have 2 or 3. They are about 6 inches (15 cm) at birth and weigh about 3/4 of a pound. (12 ounces or so). Their scales are soft, but will harden by their second day. They are mammals, so the babies nurse. They can eat termites and ants after a month, but usually nurse for three or four. Just like their larger cousins, these little anteaters carry their pups on their backs, where the coloration can help camouflage the infant. As long as the baby is small enough, the mother will roll up around it if there is danger.

I will end with a peek at an extinct pangolin found in Messel. Eomanis is the earliest known “true-scaled” pangolin from the eocene. The name means “Dawn Ghost” and thanks to the quality of preservation scientist have been able to determine that this early pangolin dined on insects and plants. (maybe it ate the plants because it was sick?) Not sure, but without help the remaining species of this family will all go the way of their Dawn Ghost ancestor. 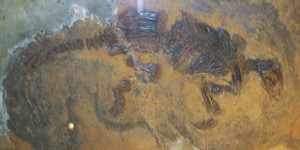