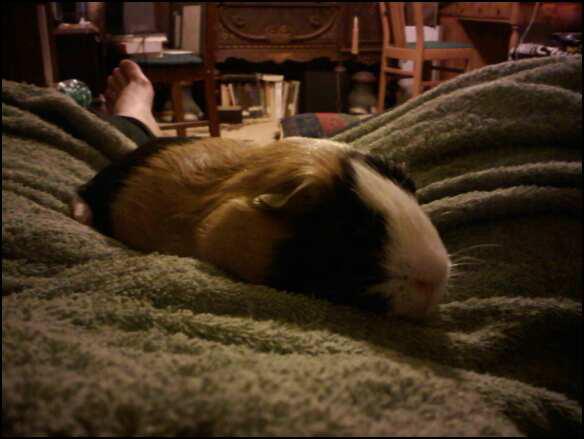 “You can easily judge the character of a man by how he treats those who can do nothing for him.”–Goethe 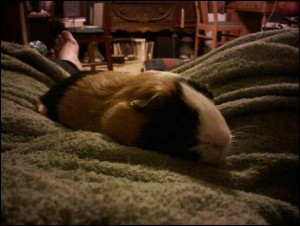 Today we buried out pet. With that in mind I would like to spend some time remembering. This generally would seem overly attached or perhaps idiosyncratic, but writing gets it out. That is not to say it empties what is inside, but it distributes in a manner than is easier to handle, at least for me.

The gamut runs from people who do not have pets, through people who see them as things, objects, watchdogs, etc., all the way through people who leave everything to them in their will.  Most, if not all in these latter cases are dogs or cats. Little attention is paid to smaller mammals whose life expectancy fortuitously aligns itself with the age of a child that wants a pet until the age that child has better things to do. This is s story of the latter. 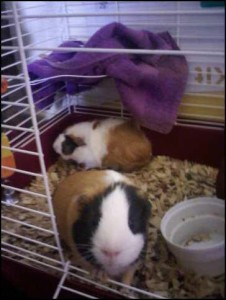 Amelia Earhart was an adoption. A full grown cavy when it arrived at our home. His name was Lilly. We didn’t bother to check the sex, but weren’t happy with the name Lilly so, since (s)he was red we decided on Amelia Earhart. My wife and I were not yet married and where we were staying did not allow dogs or cats, but small animals in cages were okay. We had been together for 2 years and this was our first pet together.

Alas, cavy’s are social creatures by nature so we went looking for at least a friend that Amelia could share the hours we weren’t home with. We adopted a neutered male. We did the little introduction days and they fought every time. That is when we double checked and found out Amelia was a male. Now we had two singular pigs that needed friends (you can see where this gets quickly expanded) Eventually Amelia and Fred Noonan had one piglet that we named Baby Lindbergh. (sense the theme?)

Amelia was the mellowest of all the cavies we had and enjoyed A LOT of out-of-cage time, mostly with me in the chair when not running around the apartment. Throughout long hours of writing and editing my master’s thesis the pig was with me sorting papers, finding citations, discarding articles, chewing on articles (him not me) and just being another awake soul in the house. He would sit in my lap as I read, and if I had the time to scratch him he would groom my arm, or my beard if he was perched on my shoulder, which happened as often as he liked. 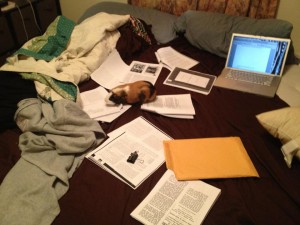 We moved to Oklahoma so I could get a PhD at the University of Oklahoma and brought most of our pets along. Most of the reptiles stayed with the science lab where my wife had taught.  Amelia made the 8 hour trip sharing lodging with Molly our hedgehog, and was as content as ever.

Once we were settled in Norman, we decide to go ahead and get Amelia fixed so he could go back in the cafe with Fred and Baby. First trip in they found a hole in his abdomen. Rounds of antibiotics later he was back to his usual leafy green eating self. We finally succeeded in scheduling and having his surgery a few weeks ago. They said he was getting cataracts and was a fairly old pig. We have had him for about 3 and a half years and being full grown (1 and a half or 2) he was getting to the end of an expected lifecycle.

About a week after his surgery his lower GI became impacted and we had to take him back and get him unclogged. They said he was probably sore from the surgery and that it would get better. It didn’t. Turns out he had a hernia that needed fixed. We didn’t know this until we got back to our vet after she came back from her vacation.

Turns out the poor guy had a hernia and an abscess as well that had attached to everything. Through all this he had a hole in his intestines. (turns out the abscess saved him for a while since it attached to the intestine at the hole and sealed it, preventing leakage into the abdominal cavity)

They worked on Amelia for three hours and got everything out. The vet was sure he wouldn’t survive surgery, but we were able to go in an see him when he woke up. She couldn’t believe it. We stayed with him until the vet’s office closed, holding him in their yellow blanket. He was a little drowsy but otherwise moving and doing guinea pig stuff. She said he was the most resilient pig she had ever seen. 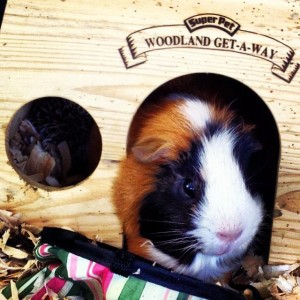 The fight through recovery was more than the old fellow could manage though, and he passed away this morning (April 3, 2013).  To say that it was a blow would be an understatement, but to admit we hadn’t figured as much would be untrue. We could have brought him home, but the facilities at the vet’s office were warmer and more comfortable to him, and the weather here has been atrocious for three days cold and wind, so we left him in his little warm cage there. Sad that he did not get to die at home, but knowing he was warm and comfortable, and had went to sleep after eating a little and exploring his cage is some consolation.

I grew up on a farm in a rural community and have been surrounded by death all my life–people and animals. If you see them as living beings you never really get used to such a loss. I study history and paleontology so I work intimately with dead people and dead things. This is nothing new to me, but the loss is, for the lack of a better word, heartbreaking. Many people would just replace a lost pet or not depending on mood, and we have other pigs, Fred ad Baby and a few others, but we wouldn’t have stopped at the pet store to get another one if we hadn’t. 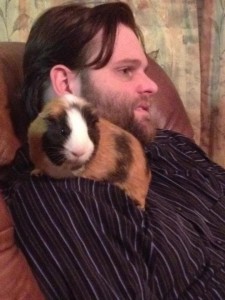 There seems to be a hierarchy of pets, at least presented by those selling, or by general consensus. Somehow small mammals with short lifespans are less pet to interact with and get attached to than a dog, cat, horse, birds, etc. That is only true if you put them away in a room and only interact with them at feeding time. Otherwise they leave just as wide a hole in your life when they are gone as others.

Today we buried my friend. The finality of that was incredible. I have sobbed uncontrollably a few times today, and teared up more times than I can count. The takedown of his home was just as bad and leaving him under the oak trees. I have dealt with each step with varying degrees of success, and I have written this through tears.

A grown man has cried all day over the death of a small house pet. And I probably will continue to do so for a few days, probably more. Time will pass, and the weeping will occur less and less, but that doesn’t mean I have forgotten. I don’t know what the equation is for hurting at death vs. enjoyment in life, but I know that the greater the enjoyment and happier the memories the greater the sense of loss. We did everything we could to help our pig, and more than most probably would. 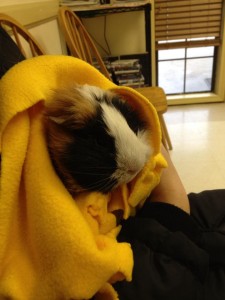 This is not the first rescue pet that we have lost. Taking in other people’s unwanted and usually mistreated animals always makes a dicey situation for how long they will remain with us, but each has ended their life in greater comfort and love than they began it, that I hope accounts for something. The vet learned some things from working on Amelia that I hope will help in future situations. Guinea pigs as a the colloquial test subjects have done so much for the human race–more than we could ever repay even if everyone wanted to–which they don’t.

I have no regrets with the life that we gave Amelia, I am not using this as a sounding board that I hope he reads and understands how much we miss him or any anthropomorphic existential thing like that. He knew, or felt, or existed in as much love as a household could manage to give. That is the best way for it to be, I think.

I am so very sad that he is no longer with us, but I am that much more happy that we shared most of his life with him. For every tear we have shed today there were 10 times he made us laugh and 100 times he made us smile. He had nothing to offer us and somehow gave us more love than we could return.


Goodnight sweet prince: and flights of Angels sing thee to they rest