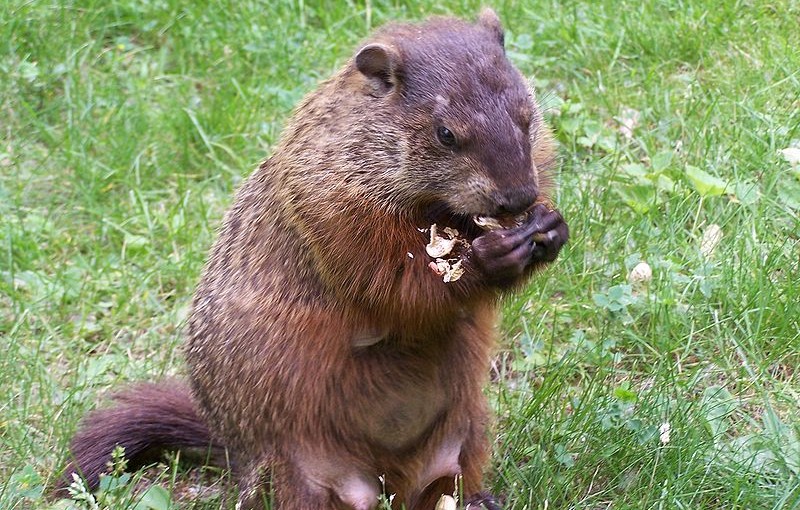 I had fully intended a post on woodchucks on the second as is customary for Groundhog day, however a death in my wife’s family has put me a few days behind.  With all the services ending today, it is nice to be able to sit and talk of nothing by pointless nature facts and look up pictures of groundhogs on the internet.

So here is goes. I will spare you the redundant mythos about shadows and sly references to Bill Murray and just go with a short, sweet introduction to marmots.

Groundhogs, whistlepigs, woodchucks, or the land-beaver, the latter of which sounds like some villain from the original Teenage Mutant Ninja Turtle series, are all the same animal.  Their relatives all prefer the highlands and rocky heights, whereas these guys are the lowland plains and fringe forest dwellers.  Being lowland means they have slightly different ties to their Clans and an almost understandable accent.   (–scottish jokes, groundhogs are not racists, and kilt jokes are hard to make on animals with such short legs. Also google could not find a single image of a woodchuck in a kilt, therefore one must not exist.)

Groundhogs are nicely sealed against their habitat. They are painted with two coats.  They have a grey undercoat with a nice arrangement of “guard hairs”that give them the “frosted” appearance, i.e. natural highlights.  They are also proficient burrowers moving roughly a cubic meter of soil (about 710 lbs (320 kg)) when getting down to business. There are several active members in the groundhog local that are pushing for the 500 lbs work week, but the rallies have yet to draw up much support.  Burrows, in which extended family can all dwell,  separately of course, groundhogs are keen on their own space.  Be it ever so humble, small burrows usually have a front and back door.  Larger estates may have up to five means of entrance and egress.  Most whistlepig flats contain about 14 meters (46ft) of hallways, and can reach as far as 1.5 meters (5ft) underground. In unfortunate situations these homes may undermine building foundations.  Burrows are not the only confusions with prairie dogs.

When out and about, they remain ever on alert.  If the sentries see any suspicious characters they will let out a high-pitched whistle as a warning. Hence, whistlepig.  They may emit low barks, or chatter there teeth.  Squeals usually indicate fighting, serious injury, or capture. When frightened the hair on their tails will stand straight up giving it a brush like appearance. Evidently all major predatory animals have an innate fear of hairbrushes, this is second only to the natural fear of fire.  Although an animal that when frightened could set its tail on fire would be incredible.

The last few seconds you can hear the whistle.

So these large hole dwelling fiends are not much good outside a burrow you say?  They are actually quite good swimmers and can climb trees when escaping danger.  They do prefer to retreat to a burrow for the home field advantage and will defend themselves with they extremely sharp claws and “big, pointy teeth” (technical term, +10 for you if you know the source.) Groundhogs are territorial and tend to be agonistic, that is they tend to search for their own truths in the word, no, no, no, wait they are agonistic, NOT agnostic.  That just means they tend to fight amongst themselves to determine dominance and the true path, so maybe they are Baptist. In that case they usually disagree about minutiae interpretation of Groundhogdom  and take half of their congregation and start a new burrow. 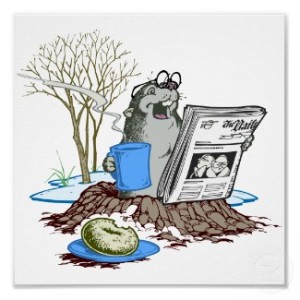 Groundhogs do build separate burrows, but it has nothing to do with differences in theology.  Groundhogs are some of the only animals that truly hibernate, and the separate burrow is for sleeping purposes. In most areas they sleep from October to April. In more temperate areas they can hibernate for as little as three months.  I am not sure if Pennsylvania is considered temperate, I hope so, otherwise people wake them up early for no other reason than to determine if they see there shadow, and they are given no coffee or hot chocolate.
A few more random points of interest:  They are used in medical research on Hepatitus B-induced liver cancer.  Once infected they are at 100% risk of developing liver cancer.  They are using them as models for testing Hepatitis B and liver cancer therapies.  Some woodchucks decided to not take the medical school rout and instead became Archaeologist.  Groundhogs are known to have revealed at least one archaeological site in the U.S.  The Ufferman Site in Ohio has never been excavated by humans, instead, numerous artifacts have been found in the midden piles of the local groundhogs.  Their diggings have surfaced significant numbers of human and animal bones, pottery, and bits of stone. 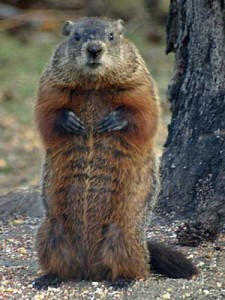 How much wood could a woodchuck chuck? Aside from Geico commercials they don’t actually chuck wood. They play jai-lai.  The etymology of woodchucking might relate to the Algonquian (some argue Narragansett, and by “some” I mean “wikipedia”) name of the animal: wuchak. Given the explorers penchant for bastardizing native languages (and people, ahem, different post) it should be little wonder that we don’t wonder how much wu could a wuchak chak, if indeed a wuchak could chak wu.
I hope that this short reading will give shed a new light on an overexposed and under-appreciated little mammal. I also sincerely hope that if you will never be able to hear that tongue-twister again without at least thinking of the phrasr “chaking wu.”