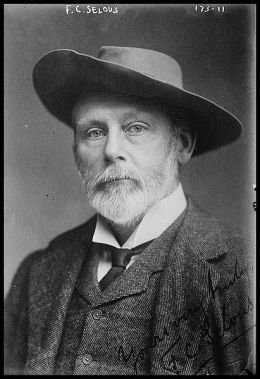 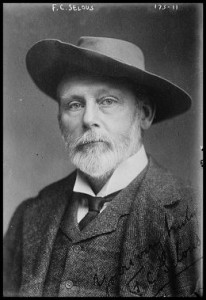 Frederick Courtney Selous is a name synonymous with hunting, adventure, conservation, and Africa. At least in some circles, that is.  Born in 1851 in Regent’s Park, London Selous became one of the greatest white sons of Africa.  His life epitomizes that of the regal English birth, with his father one time chairman of the London Stock Exchange and his mother a published poet.  The family was in all ways quite well off, but he felt the call of the Dark Continent at the age of 19.  He would travel back and forth from Africa to London to attend to business and family matters as well as meet at the Shikar Club which he co-founded in 1909.  For all other considerations he lived, worked, studied, and died in Africa.  His brother, Edmund, became a noted ornithologist and poet, in fact many of Frederick Selous’ poems and collected works reveal a depth of character that many take for granted.  Selous loved Natural History and exploration from a young age and studied any living thing that he could. During his expeditions and hunting safaris he collected many of the first specimens to come out of places such as Namibia and Sudan.  He also hunted big game across Europe and North America, but he will always be remembered as Africa’s Great White Hunter. 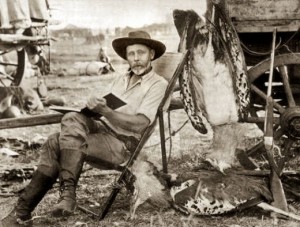 More than this and more than being the nebulous grandfather to Indiana Jones, Selous was one of the world’s first conservationist. His motives may not have been as pure as today’s, but the influence is still there nonetheless.  In 1881 he noted that elephants were growing more scarce south of the Zambezi River. The decline was so serious that it had become impossible to make a living hunting the area. A testament to his planting of conservationist seeds, the Selous Game Reserve in southeastern Tanzania is named in his honor.  The area was originally established as an unnamed hunting reserve in 1905, but due to the swarms of tsetse flies humans rarely took the opportunity. Fighting in the First World War on an advance against a German force outnumbering his men five to one Selous took his field glasses to look over a protective embankment and was killed on January 4, 1917 by a German sniper’s bullet. He was buried under a nearby tree in part of that original game reserve that would bear his name five years later.  Sixty-five years after his death the reserve was designated a UNESCO world heritage site. The world could now celebrate the diversity of wildlife and undisturbed nature that Selous had enjoyed all his life.

Nimrod was the mighty hunter in the book of Genesis, and some legends will cite him as the source of the Tower of Babel. Whose to say, there are references to The Mighty Nimrod all over the Ancient World. The moniker works for Selous only in the hunting aspect of things. However, Selous did have many powerful and prominent men as friends. Among them he counted American president Theodore Roosevelt, The world traveling adventurer/scout Frederick Russell Burnham (also known as “The King of Scouts” and “he-who-sees-in-the-dark), and the wealthy if not likes Cecil Rhodes.

Selous aided Roosevelt’s post-presidency safari, although it was officially led by R. J. Cunninghame.  Burnham fought in many of the United State’s Indian wars, and, under the belief that the west was growing too tame for his taste took his talents to Africa.  Rhodes, had more money than God and always managed to piss off the locals. Who knows what Selous thought of Rhodes ethnographic designs, but the two went about their own business and upon his death Rhodes left a substantial fund of scholarship for specific individuals the world knows today as Rhodes Scholars. He also left land to the South African country near Table Mountain that became the University of Cape Town and the other part becoming the Kirstenbosch National Botanical Garden. Perhaps Rhodes was the tower building Nimrod to Selous’ hunting one. There numerous books on Selous, including many written himself, but for a one shot wonder, I recommend The Mighty Nimrod by Stephen Taylor.