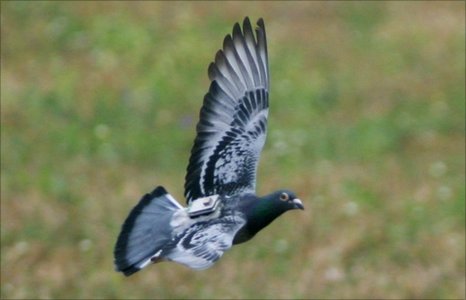 Last Thursday BBC news,  and other sources I am sure, reported on a scientific finding about pigeons and their sense of smell. Pigeons sniff their way home reveals a study on how pigeons use scent to navigate.  The study also involved stopping up one pigeon nostril. Sources do not reveal if this was done with small corks or if some graduate assistant had the arduous task of rolling up toilet paper to stick in the bird’s nose.

What they discovered was birds that could not breath through their right nostril took a “more tortuous route” home and stopped more frequently than the other tested birds.  They at least made the 40km trek and none were severely injured or killed due to their non working nasal passage.  None, at least, were reported, and in today’s psyche well, that is just as good.

I have always had a fascination with pigeons. Most people I know call them rats with wings. Having wings, and more importantly not having a long then hairless tail, makes these creature a bit more endearing to the public as a whole.  I did a paper on pigeons in the third grade. Here is where english is important, I did the report when I was in the third grade, not the pigeons.

What I found out was that they were all descended from the common rock dove. Scientific discoveries of this magnitude must be shared, sometimes forcefully, with relatives that raise doves.  So, for some time I was embattled with my aunt referring to all her doves as pigeons and giving the common street pigeons a nicer moniker of dove.

We, and by we I mean my family while I was growing up, had all manner of feathered beings about our place.  We raised chickens, guineas, quail, turkeys, peacocks, chukar partridges, emus, and a cockatiel.  One of our suppliers had fan-tail pigeons.  I was enamored with them.  To this day I am not sure if my dad got them because I was interested in them, or if because he wanted them. Either way we came home with ten pair.

20 strutting, cooing, displaying fan tail pigeons are quite a site.  The variety of color and markings was amazing.  As they reared young, something interesting began to happen.  Each successive generation feathered out with less color and more white.  Phenotypic results for genetics. A lesser controlled study than Mendel’s peas, but more fun to watch.

Years later I discovered that Charles Darwin was a pigeon fancier himself.  His interest in the specific breeding techniques that lead from the rock dove to the elegant and sometimes gaudy displays of modern pigeons led him in part to think about things differently.  In fact, animal husbandry of all types, full well known by Darwin, in no small part contributed to his theory.

Now how fun it is for me to know that by my dad getting pigeons for me, at least that is how I think of it, and that is what counts, I got to see the same generational changes that Charles Darwin did.  But, you say, those are fancy pigeons, with their fan tail and not-pigeon-colored plumage.  What about the common street pigeon? 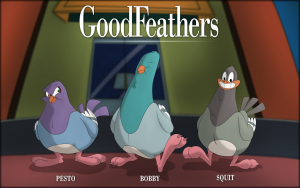 My dad worked at a refinery, the same one my grandfather worked in the lab for, and the same one that he was determined that I would not work in.  They have reboilers, towers, and units all around that are conducive to street pigeon fare. On two separate occasion they found a young bird who had fallen, or was pushed, out of his nest.  We never ascertained which happened, either they were klutzes and semi ashamed or their siblings were of the worst sort. In either case their mothers had not hatched any stool-pigeons.

They were fed a modest diet of slightly whisked eggs and smashed grapes, (the pigeons not the refinery workers) until they were old and strong enough to make the trip to our house.  They rode in the car, with neither nostril plugged.  They both took up residence within the realm of the fan-tails. They made the same noises, their strut was a bit the same, but they lacked the Carnivale plumage and over developed sense of self that came with their over-developed-absolutely-horrible-for-flying fan-tails  of their companions.

Taxonomically they are the same species, but are different breeds.  Similar to how all modern dogs are Canus domesticus whether they are a Graat Dane or a chihuahua.  The dodo is taxonomically related to modern pigeons, although farther back than the Genus, I believe.  A large flightless pigeon growing some three feet tall, that is essentially the dodo. Where it fits into my life and way of thinking comes later.

We also had horses, registered American Quarterhorse horses, papered, documented, bloodlined horses. Basically same as the pigeons just controlled breeding for regisration sake. Much less cooing and slightly less strutting involved as well. I am not here to talk about the horses.  The horses had to drink, and being of an industrious people we had a huge vat to water them from.

In life, this vat was used for creosoting telephone polls, or at least that is was I remember being told.  Large enough to hold enough water for the horses in the pasture, and large enough that we routed a water spicket out to it rather than move it again. You would think that registered pure-bred horses would have bettter manners, but they do not, they still drink with their mouths full. A horse trough equivalent of bread crumbs in the water pitcher presents its own challenges.

Enter the small beings that could eat some of the deposited horse food that was deposited at the trough.

I said the small beings. Ours never got that big, although some did get nearly 10 inches long, none weighed 30 lbs, as this one supposedly did.  If you want to read more about this monster from a lake in southern France, and all the argumentative comments on its authenticity and photoshop one link is here.

Interestingly enough, and how they fit into this stream of consciousness, the koi started showing the same phenotypic changes as the pigeons: more of the new generation’s feathers were white than the previous.  All were well on their way to plain vanilla koi.  The interim generations were marked with a gold and white holstein cow or paint horse pattern.

My point is, if there is even a point, that all the evidence is there, one just has to look at it and put the pieces together. One first glance what do fan-tail pigeons have to do with goldfish that live in a horse trough?  The answer is apparently more than you think.  I was lucky enough to see things like that and become part of that natural changing world.  The most profound answers can be found in the most humble of places.  I miss being a part of that.

What I do not miss is having to feed that menagerie between getting home from school and doing my homework.  Actually, that is probably not as true as I would like it to be.  Animals to be are the most wondrous of things to watch.  I mean animals besides ball fetching pooches and @&#^ eating kitties.  Animals that interact without you. You feed them and they are happy with that and go about their required animal tasks dutifully.

The only place that can come close to that experience in the human realm is International airports.  Thousands of people buzzing around, all you have to do is feed them and they go about their tasks as if you are unimportant or do not exist.  Interesting, yes, but not the same almost “divine” experience you get from living among troops, flocks, crashes, and pods of animals.  The International airports smell worse than farms too.

Now that you have waded, trudged, and sloshed through that muck I will explain my title choice of this blog. In fact, this is something I have had in the planning stages of artwork for awhile now.  A large family coat of arms featuring prominately the platypus and the dodo.  The shield would contain images of exploration and education, maps, compass roses, books, and quill pins. While the shield itself is made of fossil bones and tusks.

What makes these two animals perfect for my way of thinking and looking at nature is that on the one hand, here is an animal that, at the very least taxonomically should not exist, and does. On the other is an animal that should exist and does not.

One is the marvel that is great change, a venomous mammal that lays eggs.  Once those eggs hatch the young nurse on milk from a mother with no nipples.  The milk, like yours is produced in specialized sweat glands and secreted just like sweat.  The platypus just has not given itself a nipple yet.  So the next time you see someone eating cereal of having a great big glass of cold milk, or you see those ads in magazines, thing to yourself, nay, offer up your hopes to the drinker that they enjoy that refreshing glass of cow sweat.

The other, the portly feathered inhabitant of Mauritius who sings about a Jolly caucus race to Alice, the world symbol of extinction. Why is that, do you think? Dinosaurs should certainly be that poster child, after all they have been extinct for much much longer. No, it is the fact that humans, learned, traveling, reading, civilized(?), non-pooh-slinging (again?) humans, new of this animal, saw it, captured it (it was held, alive for a time, in King Rudolf II’s great sceintarium in  Prague.) introduced it to rats, dogs, and weasels, and for the first time we watched a species disappear form the planet.  We also knew irrevocably that it was our fault. 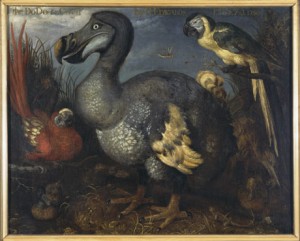 For me, life is this dichotomy of what nature is capable of producing, and what mankind are capable of destroying. We are completely out of harmony with our world.  I am not advocating paleo-diets or a return to hunting and gathering. We did after all slaughter our own swine, and beef on the same farm.
We are outcompeting nature to the detriment of our future.  Yes the world did not cease to spin when the last dodo died, nor did the sky blacken and fall with the demise of the carolina parakeet, the passenger pigeon, or the tasmanian lion.  But we did lose something, a bit of wonder, we are becoming a world that is replacing natural magic with cgi.  While cgi is great for reconstructions, they are not alive, they will always be a far second best.