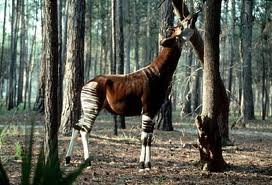 Last post we looked into two prominent species that have went extinct after the introduction of Europeans to their habitat.  Both animals displayed a striped pattern on one end of their body or the other.  If that was a singular example, one wonders why stripes do not indicate points on the dart board. However, there is one animal that is not totally striped (as for now the zebra seems safe, although Tigers are having a rough go) that seems to be rather stable. In fact, it is not as rare as you may think: The Okapi.

The IUCN Red book lists these guys are “near threatened.” Last account I heard on a nature show indicated that there are estimated around 10,000 to 20,000 in the wild. Zoo Basel (zoobasel.ch) shows about 160 in captivity, making them “reasonably common” in zoos.

The discovery of this animal by Europeans is somewhat of an adventure story. The entire write up in the American review of reviews can be read here, but I will give a brief high point synopsis.

The animal was rumored to exist in popular press accounts of Stanley’s adventures in Africa in 1887. Okapi remains found their way to london in 1901 creating a sensation.  The remains were sent by the British Governor of Uganda Sir Henry Johnston. Johnston’s connection to the Okapi is even more strange.  Apparently the Governor was alerted, or in some other manner made known, of a pygmy smuggling operation within his jurisdiction.

Apparently a German showman was in the Congo capturing pygmies for exhibition in a traveling show. (circus, perhaps?)  I have done quite a bit of research on zoos and specimen collecting, the most prominent German showman was Carl Hagenbeck, but I have not seen any references that it was eitehr he or his associates that were doing the “collecting.” That is not to say they did not, but Hagenbeck is a topic for another post.

Sir Henry daringly rescued the captive pygmies. (I have no idea whether he daringly or bravely did anything, for all I know it was a Scooby-Doo trap that went awry and somehow managed to work out in the end.) Anyway the grateful, now rescued, pygmies told Johnston more about this mythical creature mentioned in Stanley’s accounts.  I am unsure whether it is pygmy custom to tell stories when you have been rescued or if the Okapi just came up in polite conversation.

The name Okapi comes from two words in the Lese language. These are the pygmy people that we have become so familiar with.  first oka which means “to cut” and kpi which is the name of a design.  When an arrow is wrapped in bark and scorched with fire it leaves a striped patter on the arrow, this is called kpi.  Lese legend says that the Okapi decorate their legs with this pattern adding to their great camouflage.  I hope that either a Lese, or a Lese historian/ethnographer wrote that in the article I read, otherwise this whole last paragraph is complete bunk. I cannot substantiate it as I know no Leses (Lesi), or any pygmies, grateful, rescued or otherwise. But, it is a nice story.


I will say this, the okapi is mention in a book.  In fact the first time I had ever heard of this thing was in Douglas Adams’ Restaurant at the End of the Universe.  Apparently Arthur Dent’s brother was “nibbled to death by an Okapi.”