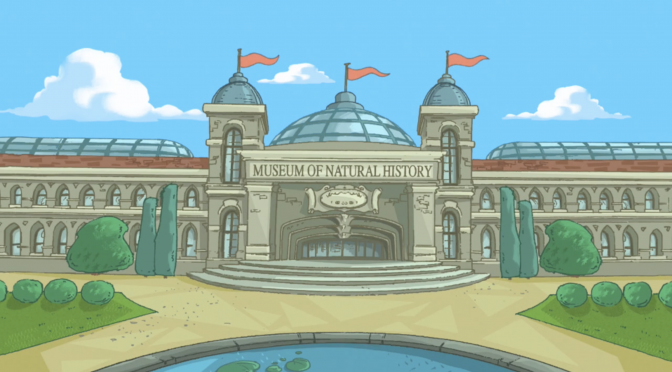 Backing up a bit, if you haven’t watched Phineas and Ferb before, or in a while, you should add it to your queue because it is well written , clever, and even the angular animation style is less offensive than its contemporaries.

The time machine arc here actually spans two episodes across two seasons. The first one, episode 21 “Out of Time” aired over 10 years ago now (!) has them fixing the time machine in the museum and going back in time.  The establishing shots and setup are great though:

Gags, and chronologically challenged fossils aside, the backgrounds and the animation inside this museum are great. They really capture the essence of the Natural History Museum as it exists in our collective consciousness. Who wouldn’t love to see a hall of gadgets through the ages permanent exhibit? Once they get the time machine working and end up in the past, chaos ensues in the predictable manner, what is brilliant is the continued cuts to the modern ichnology display at the museum as it changes from alterations (altercations) in the past/it’s present. Now, if you are into your dinosaurs you are thinking that a T-rex really gives away the geography of the show, but I am going out on a limb here and considering that this T-rex is actually called a “Tri-State rex.” Once Phineas recognizing the track, their problems are all but solved. Taking a stick he quickly draws out a message to the others at the museum. Be thankful that there is a time travel section in the Fireside Girls Handbook. Isabella and the troop arrive to save the day, only the Tri-State Rex comes back too. This is a longer clip as it wraps everything up, and if you aren’t familiar with the series the talkshow/secret agent cut will be a little confusing, but just roll with it, because “Fossils. *da, duh, dahn.*”

Again, just taking a few seconds to stop in on the interior of the museum as it rolls under a chase scene, and it is a great collection, even if the fish, pteranodon, and protoceratops thing (and the coprolite?) are a threepeat run sequence. One of the best things about this show was how well the writing meshed across its entirety. Not just within an episode but across episodes and even seasons. It was built as a coherent universe and the obvious and subtle running gags really play in to reward the viewer. The “It’s About Time” episode arcs all the way into early season two  when the time machine comes back into plot and in “Quantum Boogaloo” we  see the museum and the Tri-State area 20 years in the future. Something quietly reassuring that the museum of the future, which we are halfway to now is pretty much the same. In the end, not only was this a fun museum/dinosaur/time travel episode. It was one of the best written time-travel stories written for any medium. It doesn’t complicate itself with 473 different paradoxes, it plays out well in the 22 minutes the episode was given, and ties in pretty seamlessly with itself the following year and a half later when the second episode aired.