I am not 100% certain when these posts took the hard turn towards popular culture. My working theory is that it just happened when I started paying attention and that the universe wasn’t just waiting to plop all the ink and paint references to the prehistoric into my currently-reading-for-exams lap. Either way we get another few bits into the newest incarnation of the titular villains of the Teenage Mutant Ninja Turtle Universe, Rocksteady and Bebop. There are far more things to be said about the Turtles in Time story arc, or even the triceratops aliens from the old series, the cartoon, and toy line. There was even Manmoth a poor caveman who had the misfortune of being mutated into a mammoth.

But we are talking about the newest of the new. Throughout the month of June IDW publishing is releasing a story arc titles Bebop and Rocksteady Destroy Everything which I think has been their character description since their inception into TMNT canon. It is a time traveling scepter story which means we must. see. dinosaurs. I think it is federal law or something. (this is not a complaint!)

The first issue dropped yesterday but it was raining when I got off work so I didn’t take the bike across town the to the comic shop, so I am a day late to getting it. Oddly enough the preview for Issue #2 was published by Comics Alliance today. So I will add a panel from that in here as well. The covers all mash together as seen in the handy work of artist Nick Pitarra (@NickPitarra) and colorist Michael Garland (@MichaelGarland), who currently has it as his twitter banner. There are a ton of variant ones that I won’t see in the flesh, but the thing starts out at the Natural History museum so I have to talk about it here.

The turtles are ninja-ing there way into a new exhibit at the natural history museum featuring a strange mummy. The fact that Donatello is the one narrating just adds to my enjoyment as he has always been my favorite, even though he isn’t the turtle I am most like by default.

The preview ends setting up the cliffhanger of not only the Cretaceous humanoid mummy bit two giant bipedal creatures that look like a rhinoceros and a warthog. The explanations following that panel in Issue #1 is full of enough timey-wimey stuff to break your brain (it happened to Michelangelo) and their are time-masters that we’ve met before (if you’ve read the turtles in time series you had to see it coming, right?) 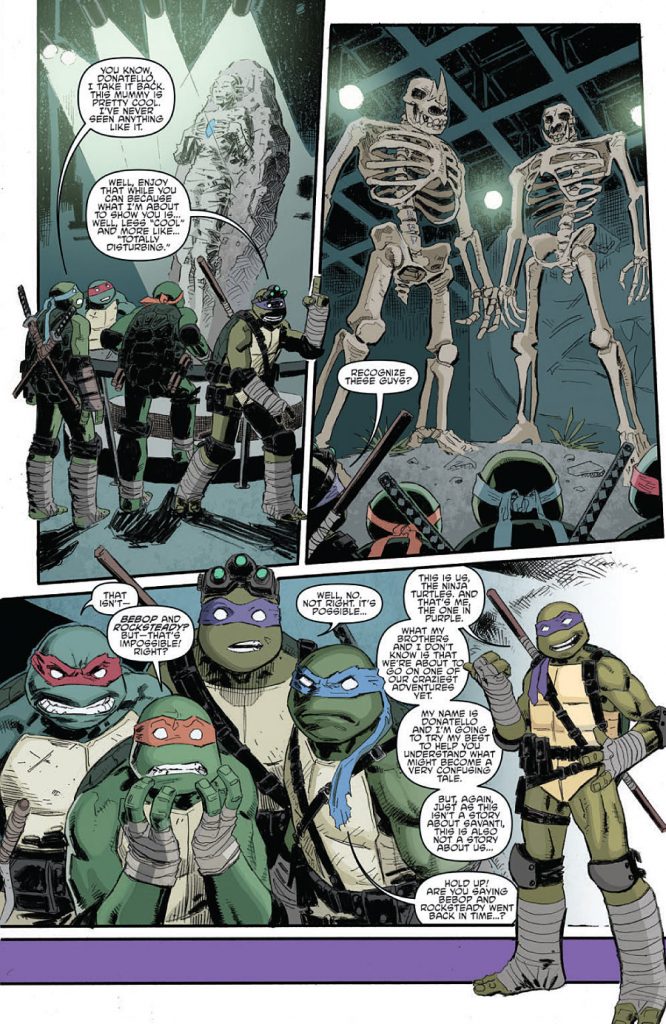 Then we see the duo and their new-old (like Cretaceous old) boss riding down on unsuspecting who knows what (it is in the preview you can check it out yourself, I am not spoiling it) on the proper means of pillage transportation during the Cretaceous–dinosaurs. Rocksteady in particular seems to be riding a therizinosaurus with its enormous claws and a skull of something else as a helmet. Bebop is on an ankylosaur that has a necklace and a nose ring. So that is where we stand at the moment. Issue #2 comes out next Wednesday and who knows where or when we go from there, but there are more dinosaurs on the way and we know at some point everyone’s favorite imbecilic henchmen have to lose their skin in order to be fossilized and on display back at the Natural History Museum in 2016. 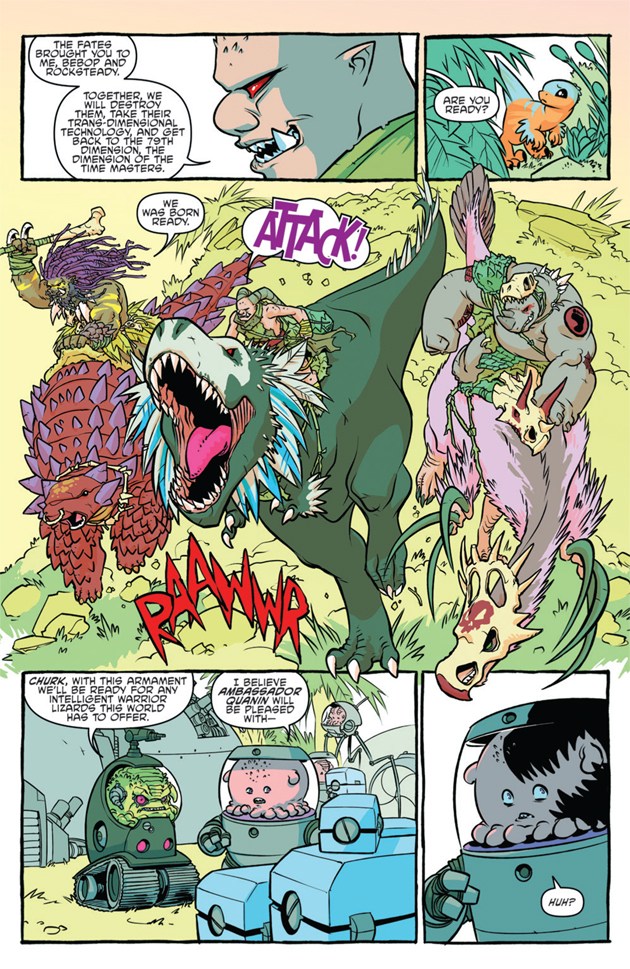 The plot thickens enough that the last two(?) issues actually go along with the IDW TMNT board game that was on Kickstarter earlier this year. If you backed you will get the play through scenarios from the comics, but you will get it in the comics either way.