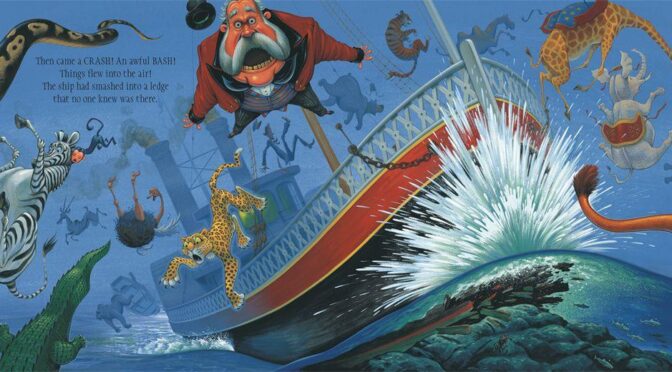 Recently a friend of mine posted they had dropped in on their child’s first grade class as the guest reader for the day. He read The Circus Ship by Chris Van Dusen. He mentioned it was one of their favorites so I hopped over to some used book sites to see if we could pick one up.

Our copy of “The Zoo Boat,” as my son called it, arrived and as we were reading it I kept thinking something about it sounded familiar. Then at the end there was an author’s note linking it to a real event from 1836. That was when I remembered reading about the wreck of the Royal Tar.

Several years ago I failed a historiography paper because I ended up so interested in the history of circuses that I stopped caring about writing a glorified literature review about it. I was mainly more interested in the menagerie portions, but there are a lot of directions you can go when writing about circus histories.

Overshadowing most of the general arc of entertainment were the constant accidents involving transport of the logistical nightmares that are circuses most being rail related and a decent list can be found at that circuses and sideshows website.

One that stuck out to me was the tragic tale of the Royal Tar steamship disaster off the coast of Maine. Singular not only because of its location and not being on rails, but also for when it occurred. It sank in 1836 and in addition to a host of animal acts it also reportedly contained a wax museum. The New England Historical Society site recounts the history of the event and the legends that sprang up around an event that saw exotic animals lost beneath the waves.

At least one book has been published on the event, but is more about the live and death of the ship itself with the cold October night being the end point to the tale.

To add to this, it also links back (at least in my mind) the the Rhinoceros that resided in Lisbon in 1515. That animal was sent as a gift from the King of Portugal (Manuel I) to Pope Leo X. The ship carrying it wrecked off the coast of Italy and the creature, reportedly chained to the deck drowned. Before leaving Portugal anonymous written descriptions of the animal made their way to a German artist and became one of the most famous woodcuts in history.

Van Dusen’s story of the circus ship has a much happier ending than its inspirational account, and almost any other story involving the transport of large animals for show and entertainment. One thing that did keep crossing my mind was while the book couldn’t make a full feature like say, Cloudy with the Chance of Meatballs it could well make a nice animated series, but would have been truly wonderful as one of the old classic Disney shorts in the vein of Lambert the Sheepish Lion or The Brave Engineer.