My son recently turned two. He also recently became incredibly interested in all things mummy. This could be from the six-feet-tall Tut sarcophagus bookshelf we have or it could be from one of the shows that we’ve watched. Anyone who has children will tell you that if the like something you get to partake of it over and over again. Luckily, there are a few outlets for mummy content across the shows we’ve been watching. It’s an interesting list if for nothing else than to think about how solidly Egyptology and Mummies’ Curses are engrained into our popular culture.

UPDATE: 5/18/2020 to add Garfield: Mummy Dearest episode. Whici Ironically is the name of this post because it wasn’t any of the episode puns I originally included.

I’d say that the first mummy out of its sarcophagus that my son ever saw was the mummy of Ankha from the first series of Scooby-Doo. Wherein the mummies curse turns people (and books) into stone.

When the professor introduces the gang to Ankah at the Department of Archeology (sic–and why?! I know it’s the time, but let’s put that other “a” back in there). He says not to worry that Ankha is over 3000 years old, which not knowing exactly how much more we can safely say that he is now over 3050. Confession: even after a lifetime of Scooby viewing I thought this was “Scooby Doo and the Mummy, too” and not just a mummy.

Our second mummy we met in Egypt; this time with the What’s New Scooby Gang at the Pyramid of the Moon helping famed adventurer Melbourne O’Reilly on an archaeological dig uncovering the tomb of Scamses XV. 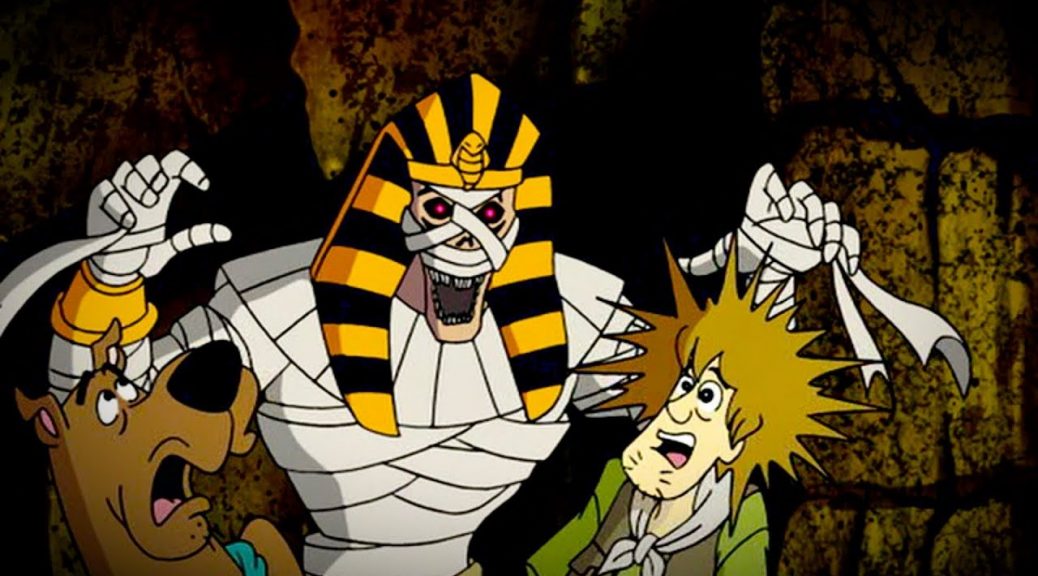 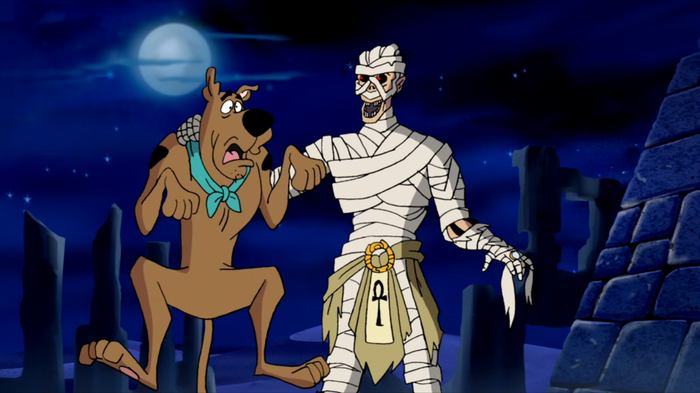 There is a 2005 feature length Mummy Scooby Doo video that is worth watching. We just haven’t fully make it to the full full length movies with a toddler, although he loved Dolittle and Scoob, and saw those through till the end. ( Dolittle in theatres, made it until the last 15 minutes). In Where’s My Mummy Velma is helping restore the Sphinx and the gang shows up to surprise her. Standard Egyptian hijinks occur, or Hiejinkies  (that’s a portmanteau of hieroglyphs and jnkies in case you can’t see how clever I am). 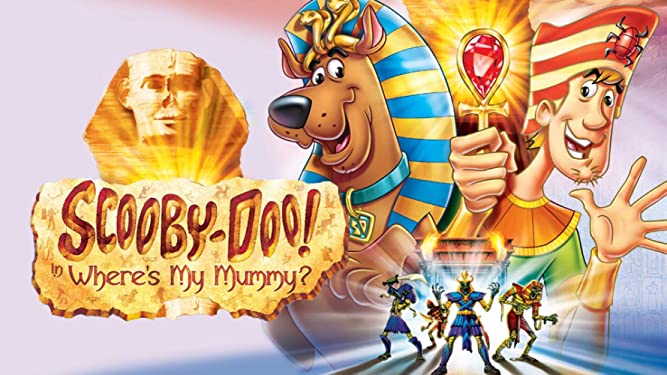 Scooby Doo and Guess Who debuted streaming in the US on my son’s first birthday. There is a cat mummy in the Ricky Gervais episode. 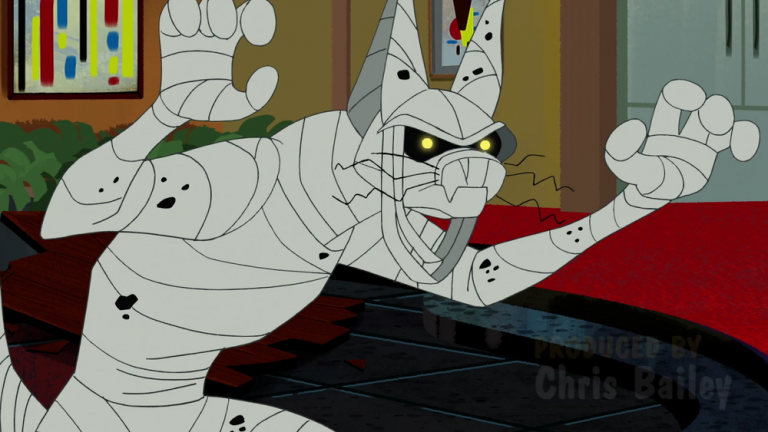 The Mystery Incorporated series has its resident mummy in the form of a ghost of a mummy of Friar Serra in the episode Theatre of Doom. I add it here to be semi complete beginning of a treatise on a publishable masterpiece on Egyptology and Scooby Doo because he hasn’t started watching that series yet in case it is too scary. 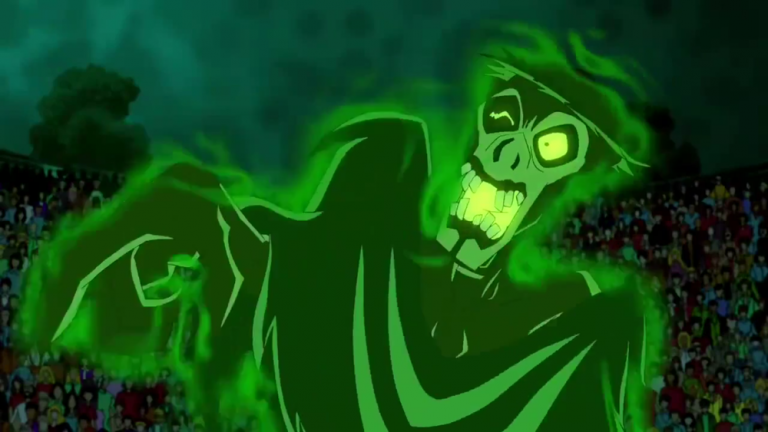 Before moving on from Scooby Doo, I’ll add that mummies show up in the comics periodically, but he hasn’t started reading those yet. There is also a mummy-themed Scooby-Doo lego set. 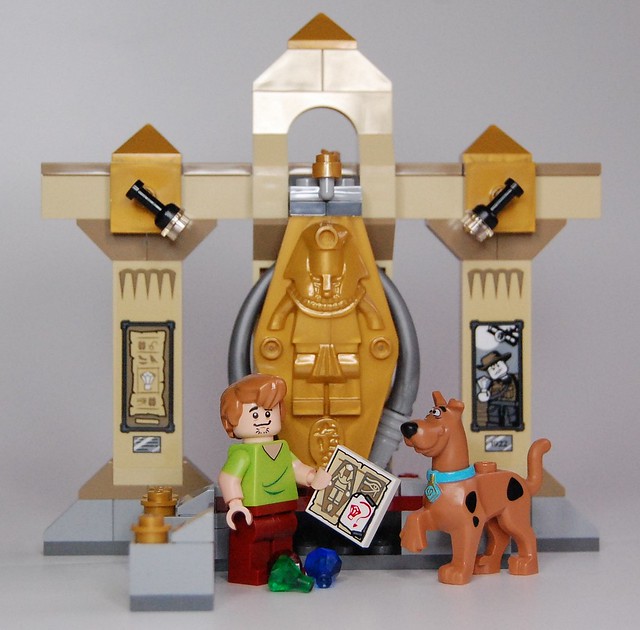 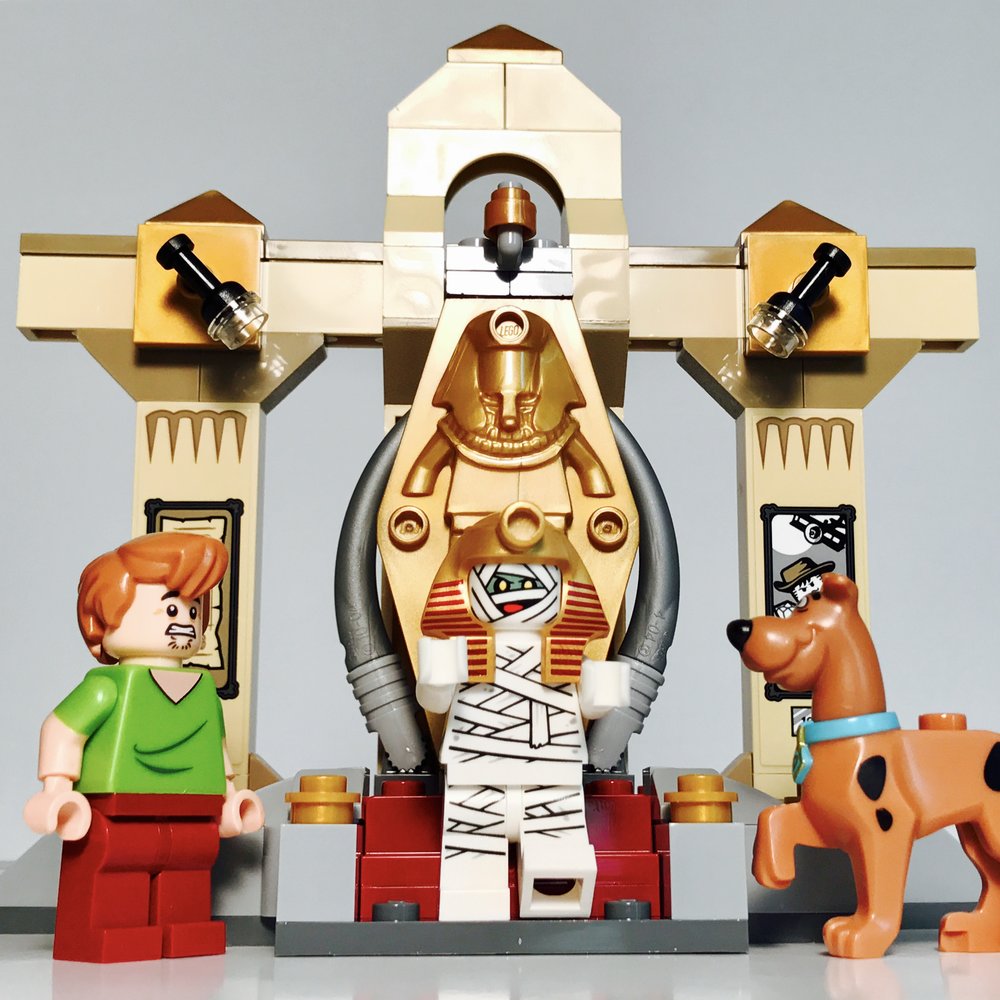 Maybe when I finally finish my dissertation I can just move to all forms of science in popular culture and make a full career out of mining all Scooby Doo  properties for this kind of stuff.

Another of our wrapped friends appears in the guardian trope in Rescue Rangers. Hiram the mummy–which I am certain is a play on Hiram Bingham even though Bingham’s fame came in South America not Egypt– was the guardian of the tomb and protector of the treasures of Pharaoh Nutun-Khamun. Hiram’s name is only matched nee, surpassed, by the title of the episode: Throw Mummy from the Train. (you have to love the 80s.) 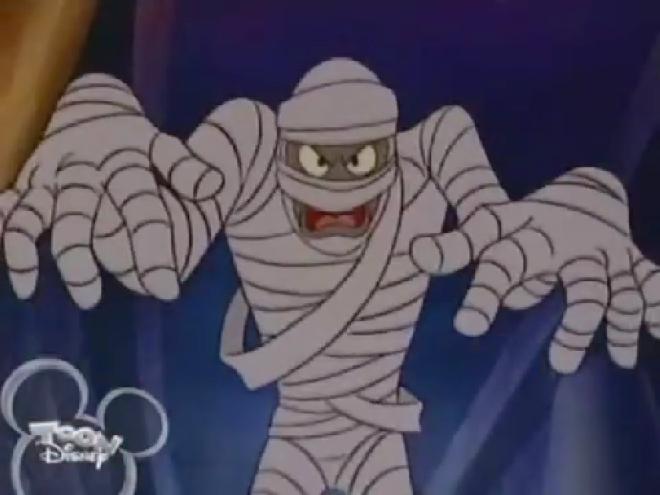 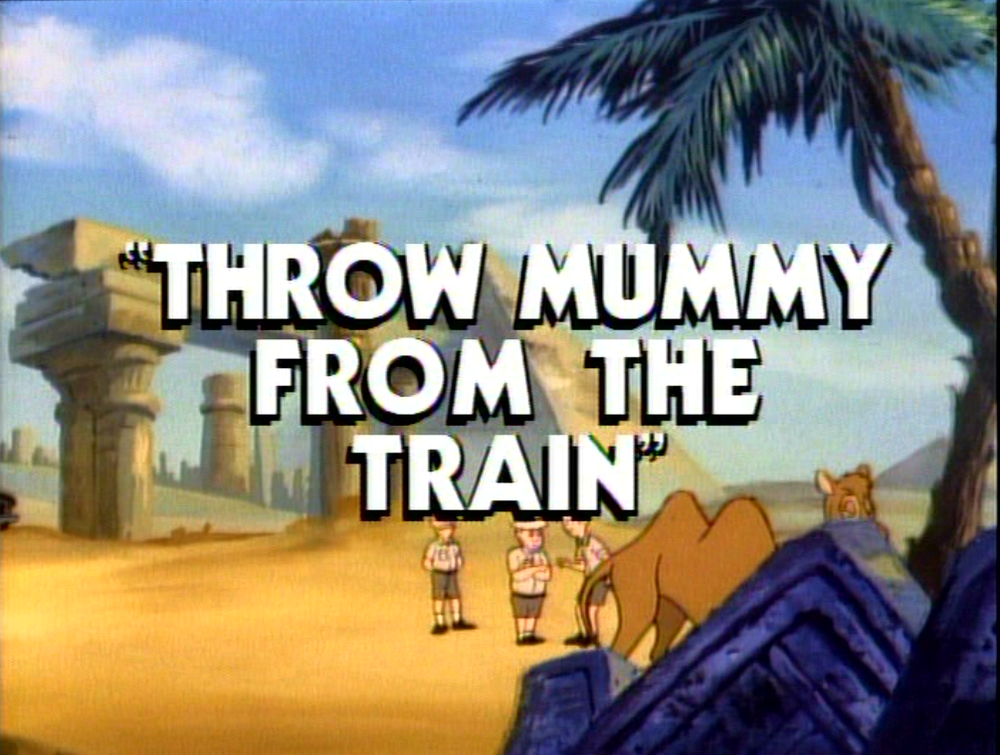 Let’s stay with Disney for a minute with Ducktales’ Sphinx for the Memories. I always liked this episode and I was happy to see my son enjoy it too. It was the first time I ever realized that the mummy’s curse might actually be on the mummy and not something that would befall ill fated archaeologists or tomb robbers for disturbing the dead and recycling their belongs. This is one of two episodes that are not currently included on Disney+ streaming. I assume it has to do with the end depictions and dialogue about living in the past, needing to modernize, etc. For the record the other one is Launchpad’s Civil War which features a southern town reenacting the embarrassing Union defeat of Launchpad’s Great Great Grandfather.

This is one of the cursed mummies who has to do the bidding of the high priest Sarkus who uses the mummy Ka-hoo-fu to rid the village of anyone that may take his power. This includes Donald Duck who looks (and sounds) like an acient Pharaoh ghost-in-a-bottle that they wish to put into Donald’s body. The Garbaled one was the ruler of Garbabel. 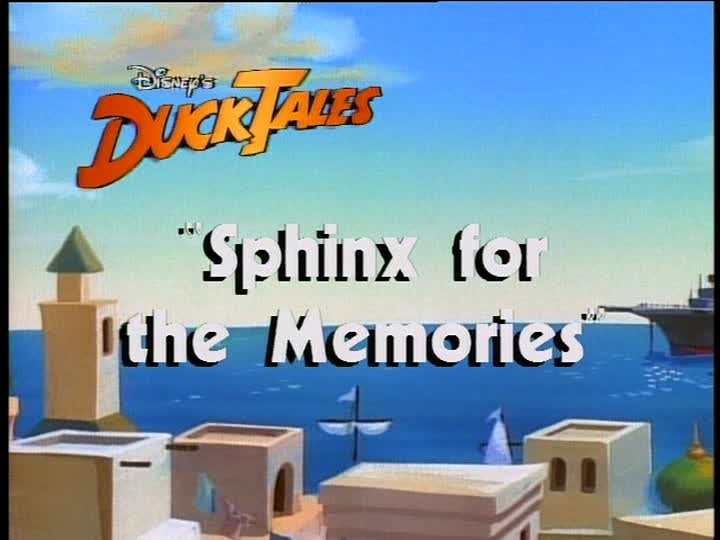 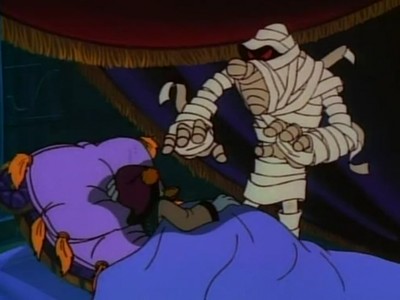 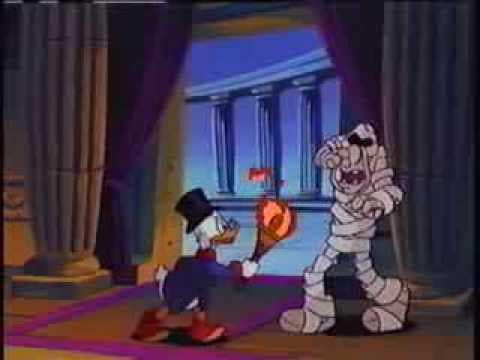 An interesting thing about this not available streaming, is that it was one of the stories popular enough(?) to make it not only into the hardback storybooks they published, but it graces the cover. We have them all and I can’t recommend them enough the art is gorgeous. Just the other night I remembered another mummy-esque cartoon episode that I had enjoyed, so I pulled it up to see what he thought. While not in full bandage mode “Blackie,” the thief of King Todd’s treasure, cuts an impressive figure in his cursed 20-feet-tall guardian mode. This was from the Long, Long, etc. Goobye episode ofThe Real Ghostbusters. 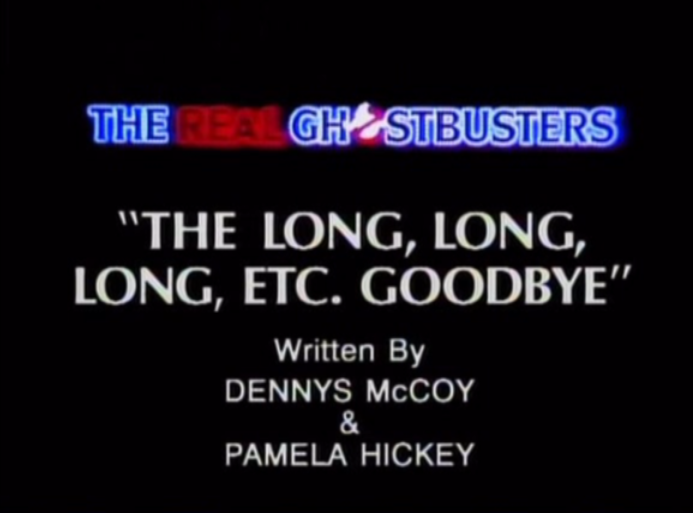 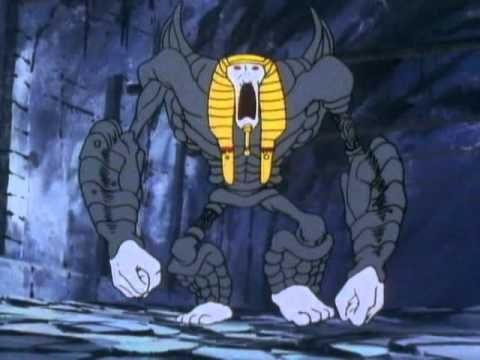 This one has an added benefit of being an homage to the old detective movies–a fact I didn’t appreciate much seeing it as a kid. But Phillip Spade, the ghost detective back to bring in Blackie (who was white, don’t worry), was voiced by Maurice LeMarche pulling in Bogart’s Sam Spade from The Maltese Falcon (and described by Winston as “the ghost with the rotten clothes.”) 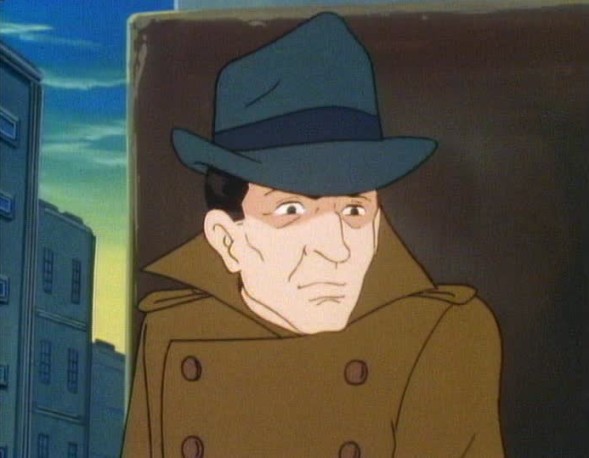 One of the best lines in the episode comes when Spade is keeping the guardian busy and Peter yells “Spade, Do something!” At this point Spade is on the monsters head covering its eyes and he yells back “What do you want me to do, ask him to stop it?”

Honorable mention here, mainly because the visuals for it was funny: There was a mummy attending Deadcon 1. When he checked in he signed the book in hieroglyphics and bell boy Egon had to carry his sarcophagus, which led him to remark “Now I know how he hurt his leg.” 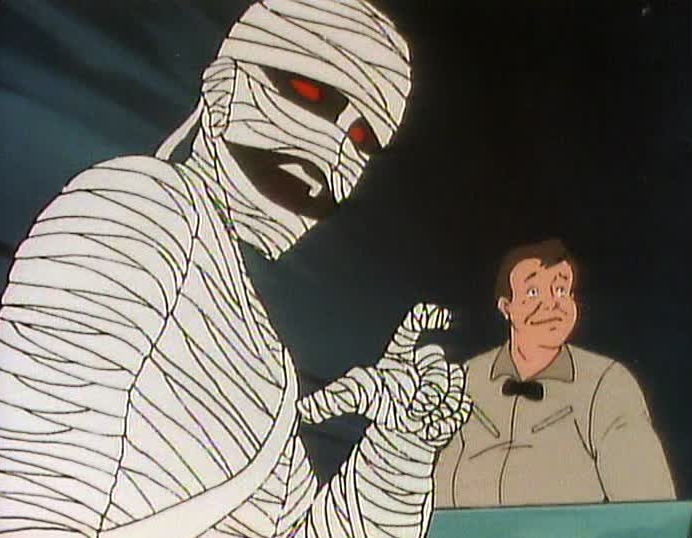 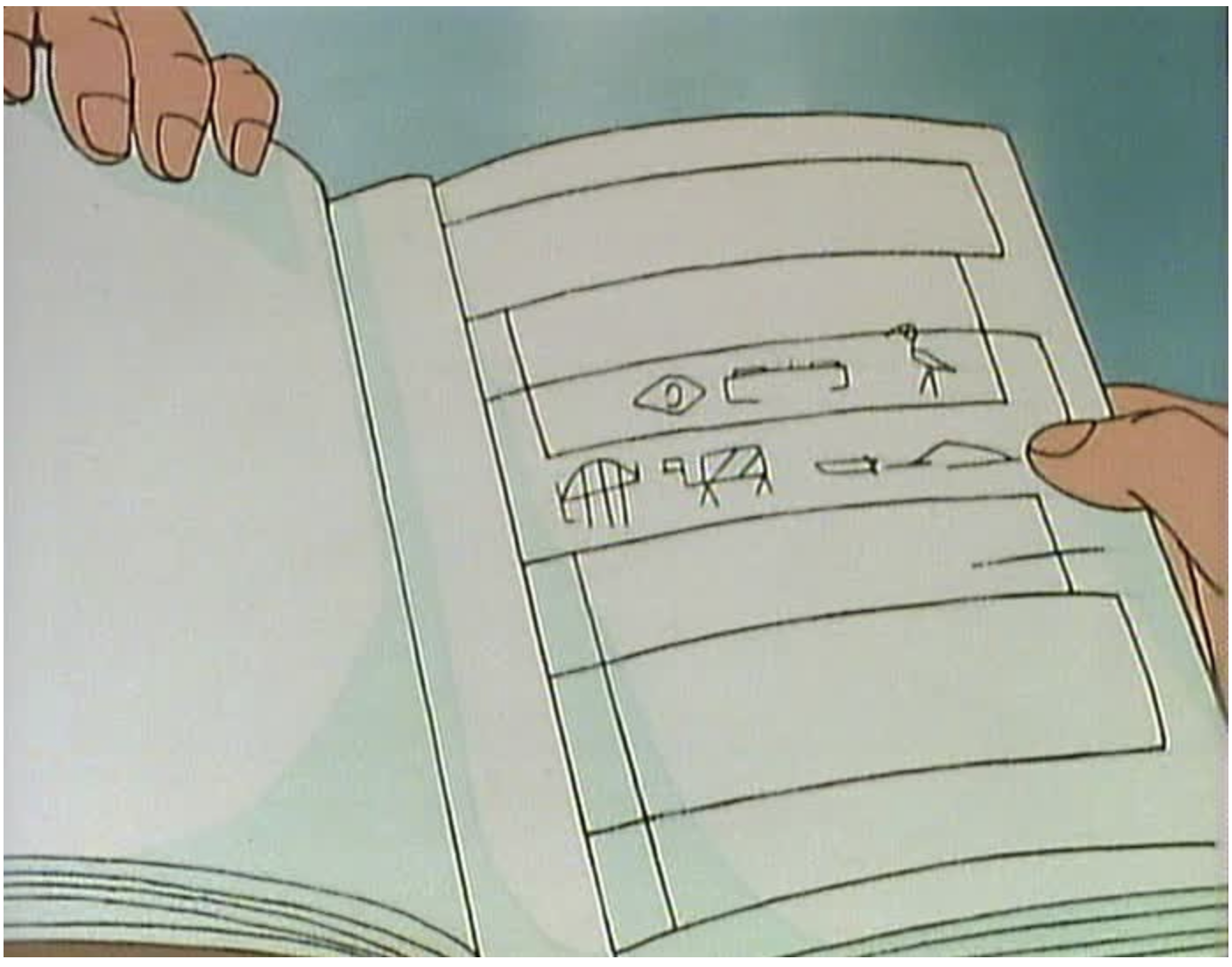 Update Addition:
This week we were catching up on Garfield and Friends and there was a mummy episode that I remembered perfectly but somehow managed to block out while making this post last week. Here to remedy that are the title card for the episode. It was the final short in the Season Two finale (Decemeber 1989) capping off The Mail Animal and “Peanut-Brained Rooster. Visiting a museum Garfield gets a bump on the head and a dream sequence featuring Pharaoh Jon and the mummy of Odiehotep. 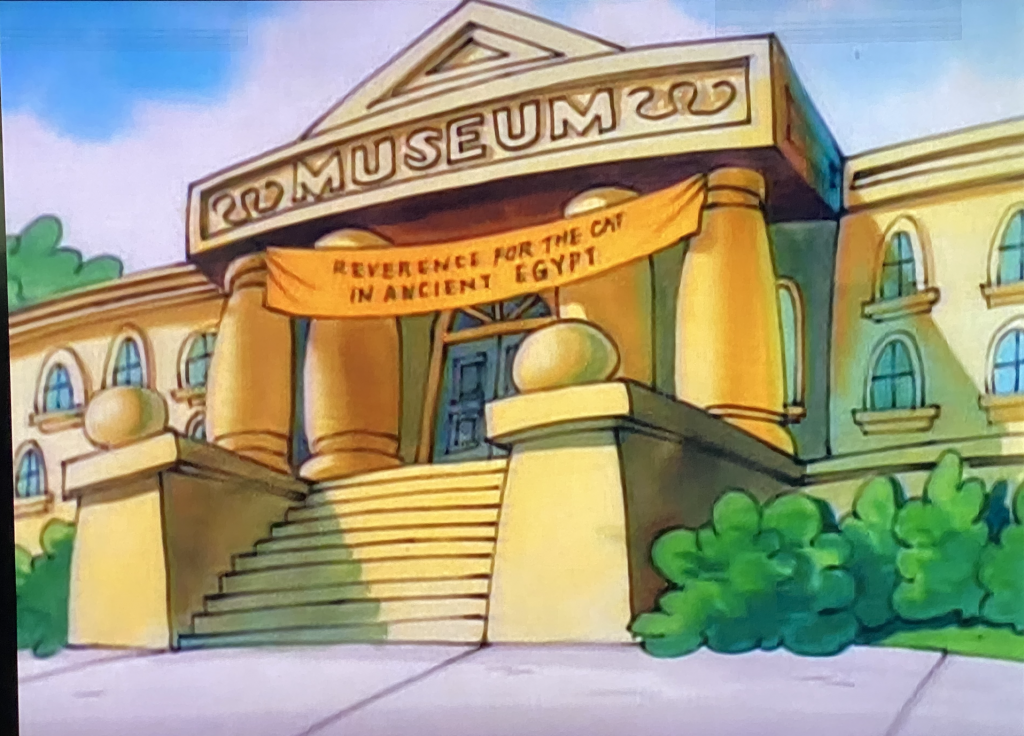 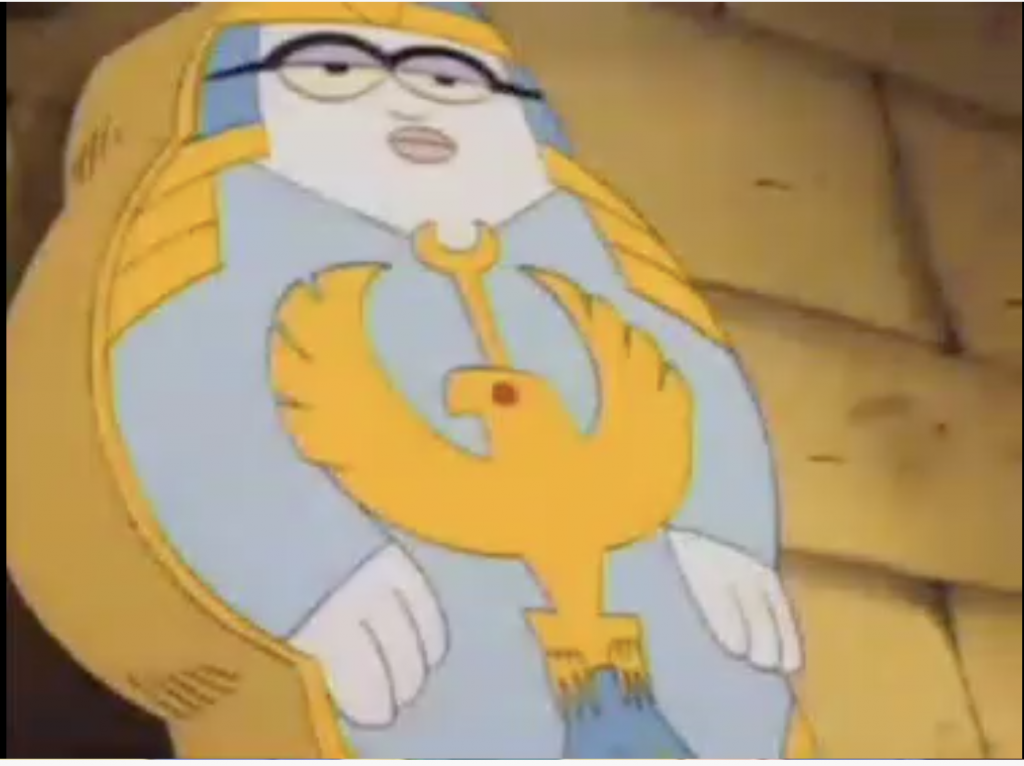 When at a loss for mummies, or avoiding watching another one of these for the fortieth time. I pulled up the intro to a show I only recently ever heard about. Mummies Alive had 42 episodes in 1997 and was produced by the same company as The Real Ghostbusters. Someone posted some action figures on instagram a few months ago and that was the first I had ever seen or heard or them. Premise is pretty straightforward (and explained in the intro): reincarnated pharaoh, evil sorcerer, mummy guardians. We haven’t plunged into this series yet, but we have watched the intro more than a few times.

What I find particularly hysterical about this intro is how it immediately put me in mind of the song “Pepper” by The Butthole Surfers, which incidentally was released in 1996. I know it is pretty different, but it’s the way my humor works, and it is generally for my own amusement and you can benefit from it, or not.

A Pre-Post Script: Something  else that we haven’t watched together due to the potential scariness factor is the Doctor Who episode “Mummy on the Orient Express.” You can take it as a great amalgam of two Poirot titles, but this one really harkens back to the curse of the mummy being a curse on the mummy. The writing and pacing, and the solution to this episode makes it one of my favorites. I am sure there are many I have missed in this list (maybe let me know in the comments?). At least one Scooby Doo PC game (Jinx of the Sphinx) came up when I was checking on dates and series titles but I have no familiarity with it at all and there is teh Universal Monsters slice of the 2014 Teenage Mutant Ninja Turtles, but we haven’t seen that either and I mostly wanted to keep the list to things we knew and have this little slice of time when my two year old became an Egyptologist.