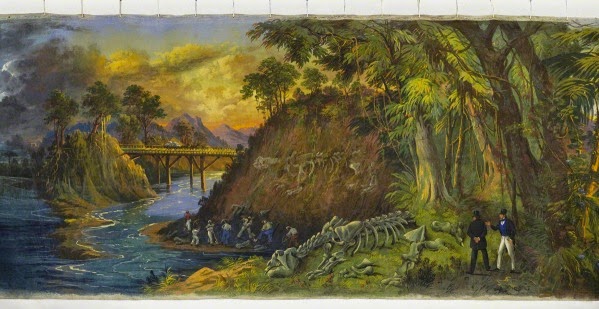 The year is 1851, you make your way through the streets of Philadelphia to a small theatre where scores of other interested parties are milling around waiting to be allowed in. You deposit your 25 cents for admission (12.5 cents for any children you have in tow) and make your way inside. The din of attendees drown out any discernible conversation as everyone finds their place before the show starts. For weeks printed advertisements have been calling this something you did not want to miss. Not only will they be displaying a full moving of the Mississippi River but it will be accompanied by the eminent Dr. Dickerson’s lectures which were “by themselves worth twice the price of admission.”

The good professor (and medical doctor, no less) records his own opening of over 1,000 Indian mounds and boasts a collection of over 40,000 relics recovered from his excavations. Center stage of the theatre (sometimes special built to display such panoramas) sits an enormous muslin painting nearly 8 feet tall and nearly 14 feet long. The full length of this particular panorama is 348 feet and will be wound through as Dickeson lectures literally moving down, or up the river. The panorama is so large that instead of “rewinding” the show after every performance the matinee show would feature a trip down the “Father of Rivers” and the evening show would work in reverse going upstream.

The lights dim and the spotlight hits the panorama and you begin your trip down the Mississippi River led by Dr. Dickeson whose stories, both scientific and anecdotal, would be accompanied by music and in some instances smoke effects to get a more authentic feel of a steam powered paddlewheel boat. These were not only the precursor to movies, but to those 4D experience rides that some museums have today. The images are not only impressive for their size, but the vividness of color and superb detail.

The scenes seamlessly pass as Dickeson narrates the journey highlighting the Indians, their villages, customs, accouterments, etc.
If you will notice, now the skies have started to darken. Slow, dark, and deep music begins to play ominously and suddenly a storm is crashing upon the audience with all the appropriate theatrics as the next scene rolls with the destruction wrought as a tornado touches down.
Wind and rain subside but the dangers of living around the river are no less under friendlier skies. This is where I image great melodramatic music a-la Dudley Do-Right begins to play as this man flees for his life from wild animals, in this case wolves.
Does the squatter make it to the safety of his cabin? Only Dickeson’s notes say for sure.

This is one of the only hard breaks between scenes. Which may have been done on purpose to show the hard line between warfare and more peaceful, pastoral, and placid parts of the trip.

Scene 18 is the only that is currently on display with the Navigating the West: George Caleb Bingham and the River exhibit at the Amon Carter Museum of American Art.

The Magnolia churns up the river as passengers take in all the surrounding natural wonder. This ship would have been well known to Dickeson’s audience as the one that chugged the eminent geologist Charles Lyell along the Mississippi river. Snags, cypress knees, swamps, and decidedly large alligators line the banks and the river bottom, while the going is good, this isn’t an effortless river cruise along the Rhine, or Seine.
The following scenes are my personal favorites as they begin to detail Dickerson’s actual excavations of the Indian mounds along the river.
The stratigraphy in these mounds is portrayed brilliantly. The panorama was painted by John J. Egan, an Ireland-born American artist specifically commissioned by Dickeson to paint his lectures based on his sketches from the field which he produced between 1837 and 1844. With that in mind, I believe that Egan has put Dickeson here sketching the mound as slaves (I assume) do the actual excavations.
Now, I knew about Dickeson’s panorama, and I even know that there was many ethnological and archeological aspects to it. I didn’t realize they were this detailed and I was surprised further still as I watched the digital scenes scroll passed on the monitor next to the display. Scene 23 caught me fully unaware and had a full jaw dropping moment.

There were fossils! Enormous bones being excavated from the sides of a ravine running along the Mississippi River. Not only were they isolated bits and pieces, but giant skeletons, nearly complete. Rendered so well by Egan that they are obviously giant sloths. This image also ties Jefferson’s (incorrect) original description of the claws of this type of animal and the beautiful painting by Charles Wilson Peale Excavating the Mastodon. The details are breathtaking.

Scene 24 is the last with full landscapes on it. A pensive Indian looking over the mound, and based on mound for scale, what is affectionately known in professional circles as “a big damn snake.” It is interesting to note here that this Indian nearly reflects, or at least faces those that started us off on his journey. 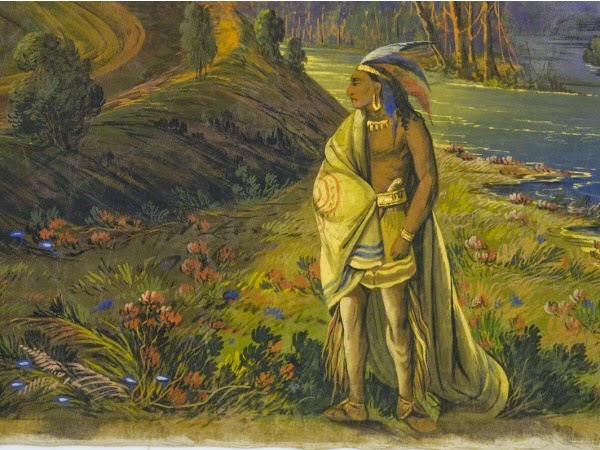 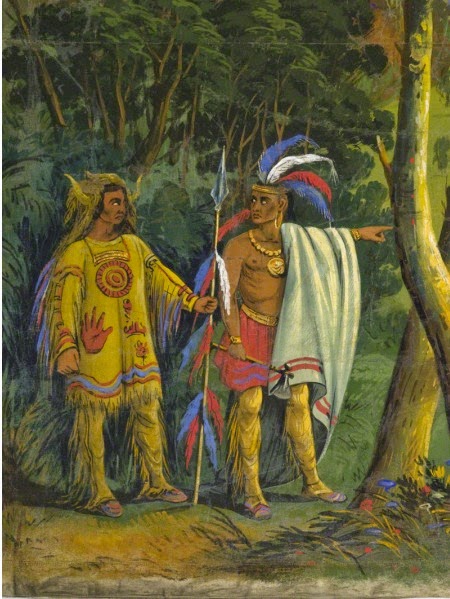 Whether this is just coincidence, or whether Egan, or Dickerson for that matter, are framing 300 feet of muslin cotton might be debatable, but it does show the vast variety of native life and ethnography that spans the river.
Now, you have come to the end of your river travel and heard the thrilling tales of adventures running the river, exploring caves filled with rock art, and excavating Indian burial mounds collecting along with the doctor various and sundry artifacts. This was just one of many of these types of education and entertainment that was touring during the 1850s. It is the LAST one that exists that tours the Mississippi River. It lives at the St. Louis Art Museum which is where they host these images here. As I mentioned before it is on display at the Amon Carter Museum of American Art in Ft. Worth until January 18, 2015. The Navigating the West exhibit then moves on to St. Louis and from their to New York and the MET. The Amon Carter had to build a special contraption to display this as the device that St. Louis has was too heavy to stay on the second floor exhibit in Ft. Worth. They aren’t sure it will go to the MET as they don’t want to deal with the logistics. Luckily this is painted on muslin and only weighs around 220lbs (100 kilos) according to one source I looked at. Here is a short time-lapse of the installation at the Amon Carter:
There is a great interview regarding the conservation work on this panorama here. Other than being labeled rather vulgarly a “steampunk movie” it is worth a read if to just get a sense of scale of the painting images such as these: 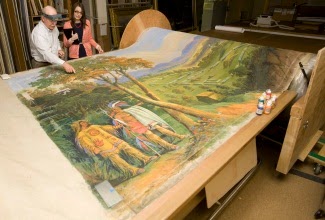 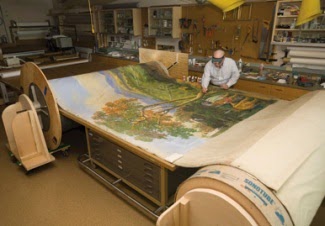 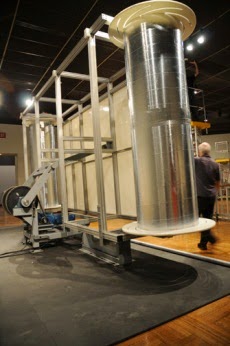 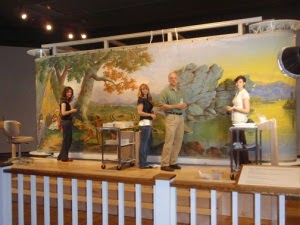 If you are more interested in the particulars of the artwork itself and not just the images portrayed on it, there is some of the history of rediscovery and first conservation work on the glue based paint and other particulars here.
The St. Louis Art Museum also offers a pdf of the panorama image sheets that you can access here in case you want to look at them in a manner other than blog form. We’ve looked at a lot of individual scenes as they would have been rolled, unrolled, and rolled again. But, you have to remember that this is one image that is nearly 350 feet long. I have no idea what that would look like stretched out, or where you would even exhibit it, but SLAM has shot them a few scenes at a time to get a rough feel.

Dickeson gave his panorama and artifacts to the University Museum at the University of Pennsylvania in 1899. Some of the artifacts that were in that collection are most likely portrayed in one or more of the scenes of his panorama, which may be at least part of a research trip over there. The St. Louis Art Museum purchased the panorama from the university museum in 1953, but it did not go on display until just a few years ago.
This is by far, one of the most unique pieces of Americana that exists in the world. It reveals much more than just the scenery along the Mississippi River Valley, it is a consummate artifact that embodies the history of art, the history of science, and American history. If it does nothing else (and it does so very much) it serves to remind us that the mid 19th century was a much more dynamic and interesting time than we are likely to give it credit. After all, it was filled with such oddities as the traveling moving panorama lecture which could take you on a Mississippi River cruise anywhere that the work could be displayed.
If you would like more heady readings on this panorama, and others,here are some good places to start:
Luarca-Shoaf, Nanette. “Excavating a Nineteenth-Century Mass Medium,” American Art, Vol. 27, No. 2 (Summer 2013) pp. 15-20
Luarca-Shoaf, Nanette. The Mississippi River in Antebellum Visual Culture. PhD. Dissertation University of Delaware, 2012. Specifically Chapter 4 “Currents of Time on the Lower Mississippi: M.W. Dickeson and Monumental Grandeur of the Mississippi Valley” pp. 170-239.
Lyons, Lisa. “Panorama of the Monumental Grandeur of the Mississippi Valley,” Design Quarterly, No. 101/102, The River: Images of the Mississippi (197) pp. 32-34
Update 10.23.14 New Video from the Amon Carter on the Panorama itself: