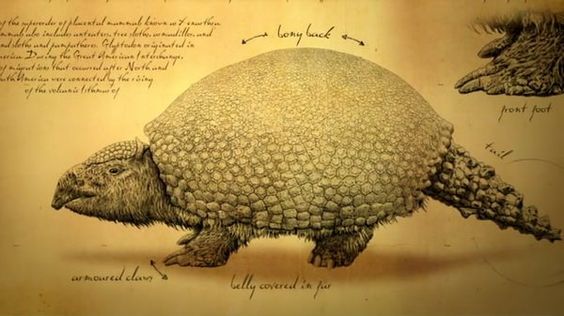 *Thanks and/or blame for this goes to Tom Luczycki

Hey look! A paleo entry on an supposedly paleontologically themed page! How novel.

I will start with this great coincidence from 2007 when the Society of Vertebrate Paleontology’s journal (JVP) was released not only on my birthday, but with one of my favorite extinct creatures on the cover:

And since it is one of my favorites, the past few days’ worth of paleo news circulating in the popular press and among friends and colleagues on twitter has been a delight.

Yes, well. If you haven’t heard/read by now, they have played around with some glyptodont DNA (how cool is this?) and determined what any school kid will tell you: They are related to the stately armadillo. Actually related to “armadillos and their allies” so the end is nigh for the Ice Age Axis Powers.

Since the original press release, I have posted several different versions over on the PaleoPorch Facebook Page. Enough to constitute putting them together on here so you can be annoyed all at once instead of incremental scrolls on your timeline.

I mentioned that any school kid will tell you they are related to armadillos. I mean this in the same manner that all school kids will tell you that South America and Africa fit together–it is just obvious. Right?

Since science doesn’t like to live in the obvious it sometimes takes studies like the one linked above to provide a backing for something that seems self evident. I mean, it *could* be a case of convergent evolution like sharks and dolphins.

This might also prove that they didn’t have “trunks.”  I never really bought into this argument and it is probably my own fault of thinking about an armadillo with an elephantine proportioned proboscis, which isn’t technically what proponents of the elongated schnoz are/were pitching.  Bit, DNA can’t give us shapes of soft tissue unless it is fully cloned and 100% and viable and… Welcome to Ice Age Park. (A dinosaurid aside: at one point, and I am not sure where in print, Bob Bakker was theorizing that the brachissaurus’ nostril on its head made it akin to an elephant, but Darren Naish (@Tetzoo) put that to rest way back in 2009.)

Now that there is scientific proof that Glyptodonts are related to armadillos, that means the allies range from the pink fairy armadillo, which is about the size of a toilet paper tube, to the Volkswagen beetle behemoths we’ve all come to know and love.

Besides, I am from Texas, and we love our armadillos, especially when they are Texas-sized. Especially when it means that the beer can be scaled up equally.

We has one of these when I was a kid. It was plush stuffed and not taxidermy stuffed and lived, so to speak, on top of our kitchen cabinets, I thought it was the neatest thing. Full disclosure: Shiner is a better beer.

I was also less than thrilled with the short shrift they got in the Ice Age cartoons too, but that is another story.

A relatively recent documentary on Ice Age Giants captures some great fossil footage of in situ and museum specimens down in Arizona. Ice Age Giants was hosted by Professor Alice Roberts (@DrAliceRoberts) and it definitely worth a watch. (part of an older post here). Here is the first episode and the Glyptodonts show up around the 22:20 mark, just after the Shasta Ground Sloths and the Grand Canyon segment.

As an ending thought, the next time you are out for Mexican food or Tex-Mex, take the opportunity to order yourself a nauseous armadillo (that is a queasy dillo (quesadilla))