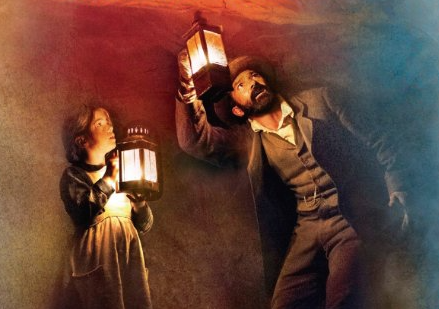 Turns out Hugh Hudson has a new film out that focuses on the discovery of the prehistoric cave paintings in Altamira. If you aren’t familiar with the discovery, the Cliff Notes version is an 8 year old girl named Maria led her father Marcelino Sanz de Sautuola to a cave which held amazing paleolithic paintings of bison among other wonders; scientific debates ensue.

The end of the 19th century was rife with debates on man’s place in nature as well as the entire story of mankind in general. The established French view was that prehistoric humans were incapable of such higher forms of thought required to create such things. Arguments about the past and the professional nature of the scientists and divided disciples were heated, marked, and many times personal. Paleoanthropology and other disciplines as we know them were in their fetal stages and battle for the authority to pontificate on humanity’s past was as much the prize as finding answers to the questions they were asking.

Having done a fair amount of research on the Piltdown Affair and its context within the debates that came to a head because of find like Altamira, I am especially intrigued. Adding to that is the fact that like so many other important discoveries in this period it was made by an amateur. That is to say it was reported by an amateur since it was originally discovered by a child.

The movie itself looks wonderful since it will have the debates and forces of will involved (including the Church). It also included the wonder that fills Maria as the bison from the cave come alive in her dreams and become a part of her.

As with most things in life I didn’t get to this from any direct route. I actually first heard of this film through a trailer for its soundtrack. As bizarre as soundtrack trailers sound the bits and pieces around it are where I can glean more of the story.

Mark Knopfler and Evelyn Glennie worked together to create the score for the film and it sounds incredible. It was on Mark’s official Facebook page that I first say the trailer to the soundtrack. Complete with the reimagined stylized version of the famous bison on the front.

The bison form Altamira are iconic and you may recognize them from the plethora of Bisonte cigarette ads/packs that are everywhere. (I say everywhere, that may only be the case if you are as interested in Spain as I am).  If not everywhere then at least on cigarettespedia.com which is a more useful website than you may think, especially for someone who studies visual culture.

Getting to the heart of the film is difficult since all the available trailers are in Spanish since it was released there at the first of this month (April 2016). This isn’t because the film is in Spanish, but because of locality (I guess). So the trailers are dubbed into Spanish which just strikes me as odd, even if I am appreciative of the fact that was produced in English.

There are a few English clips that are part of the making of the soundtrack video below where I grabbed some of the above photos. As far as the cave itself goes, it remains closed to visitors since the damage it sustained from visitor’s breathing in the 1960s. The museum close by has a full replica included some sculptures of human faces that you couldn’t get to in the cave itself.  There are also reproductions in Madrid, Germany, and most recently Japan.  The Caves were up for reopening to the public a few years ago, but in an effort to preserve the site the decision was made to keep them closed. looking at a fake trope was still contentious in 2014.

The Cave was designated as a UNESCO World Heritage site in 1985 and they have a short video on it as well. Until it gets wider release this will have to suffice to piece together what is going on.