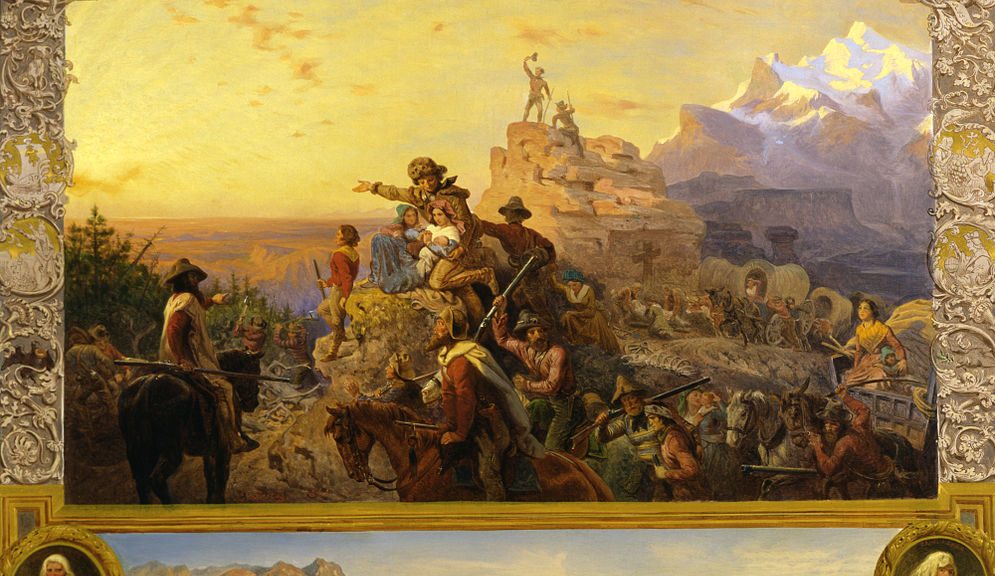 It’s Christmas Eve, so what better time to post my Road to Comps Eve post. One more set of readings and I will have completed the entire list AND 2016. I hope to make my final post next week too.

These last couple of sections are bits and pieces of larger works and many of the points have been made in previous posts (and previous books) but they serve as having another place to return to pull information in order to make the points in my dissertation (this isn’t entirely for tangential exams to prove I can stay on a task for an extended period of time). 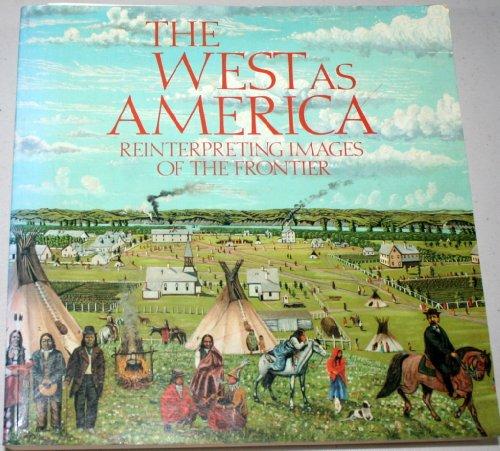 William Truettner’s (editor) The West as America: Reinterpreting Images of the Frontier, 1820-1920 was something I had seen in class before. It serves as a textbook for image use in promoting the west to settlers and to modern museum visitors. Interestingly enough the book was published in 1991 to accompany the contentious art exhibit. 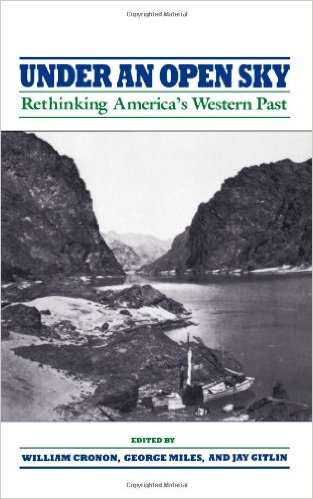 The following year William Cronon edited a volume entitled Under an Open Sky: Rethinking America’s Western Past (see a trend here?). Martha Sandweiss’s contribution predated her book Print the Legend by a decade, but many of the points she made about photoraphy are relevant to art as well, as I argued in the previous post. In short, art should be considered as primary source material within its cultural context and it should not be taken at face value. 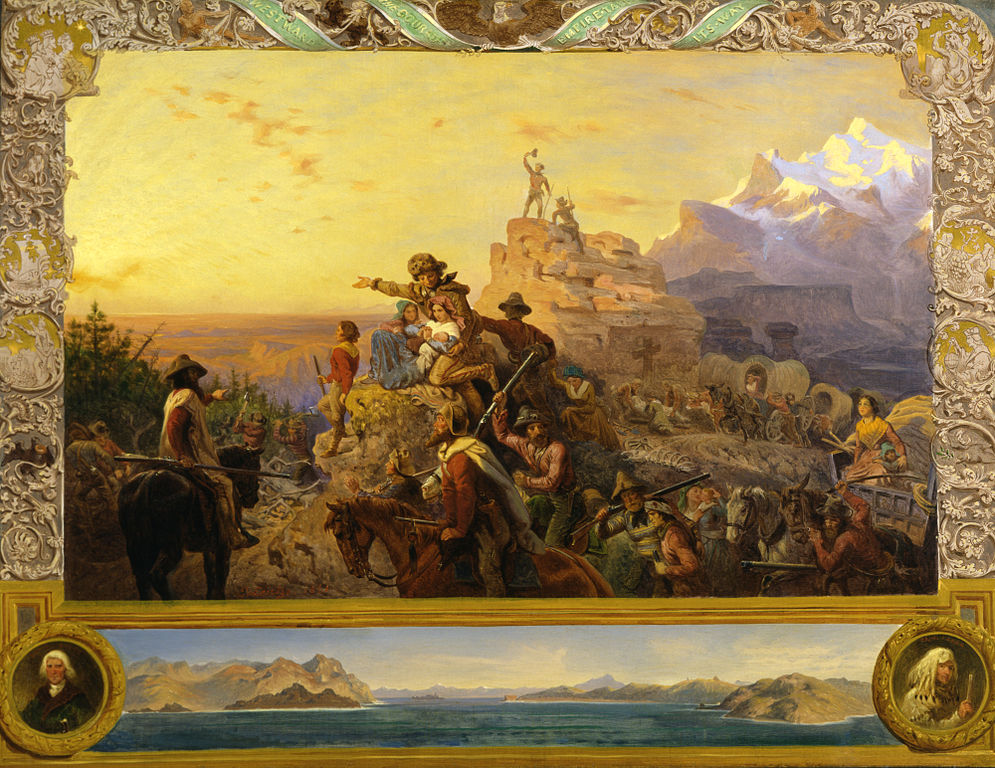 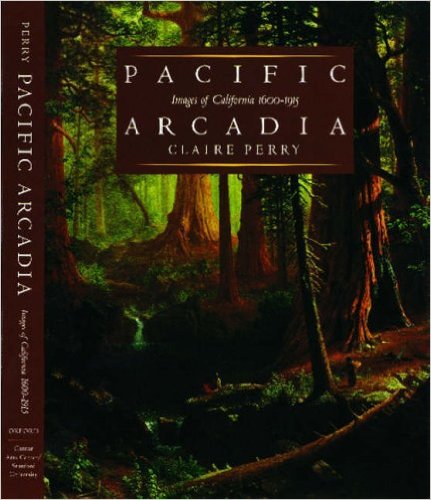 Claire Perry’s essay “Cornucopia of the World,” (Pacific Arcadia: Images of California, 1600-1915) highlights the trouble western promoters faced when the gold ran out of them thar’ hills. The focus shifted from mineral to agricultural wealth. This was not an easy 1:1 substitution as the arid areas of California couldn’t be farmed in any way remotely resembling farming practices in the east (or even the midwest).  Interestingly enough, this preambles the turn of the century tourist boosterism that came as Americans became more autonomously mobile. 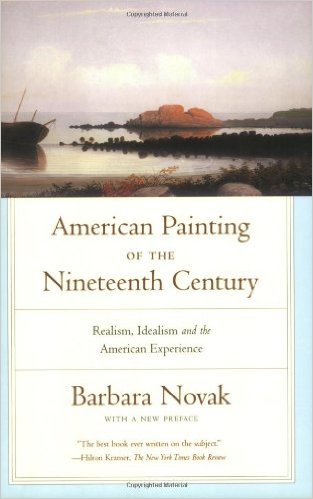 Barbara Novak’s American Painting of the Nineteenth Century: Realism, Idealism, and the American Experience  is in it’s third edition (1980, 1995, 2007) which shows that understanding American art in its own context isn’t a simple project. The strength of Novak’s work is intensified when you can look at it in tandem with the David Reynolds work on 19th century American Cultural History.  Novak provides the in depth artistic analysis and Reynolds provides the larger background to help frame it. 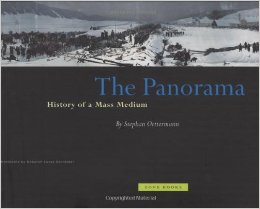 Stephan Oetterman published an enormous treatise on the art of the panorama. The Panorama: History of a Mass Medium is a fascinating look at a (literally) huge pieces of American art. To understanding the draw and experience of the moving panorama you can see this previous post. Oetterman’s research indicates that far from the generally accepted idea the the panorama was based on ancient ideas (or ideals) is erroneous and it was in fact patented in the late 18th century.  Part of the draw for this type of artwork, stage or no, was increased with the western landscapes and light plays that were highlighted in the few other gallery books included on this list. he even points out that movies in the mid 20th century were produced in cinescope which mean that it took three projectors and three screens to capture it grandeur of the west.

Beautiful books that provide extensive examples of their respected topics are 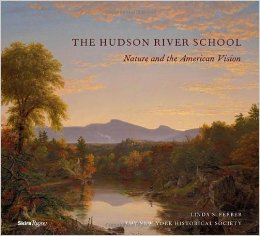 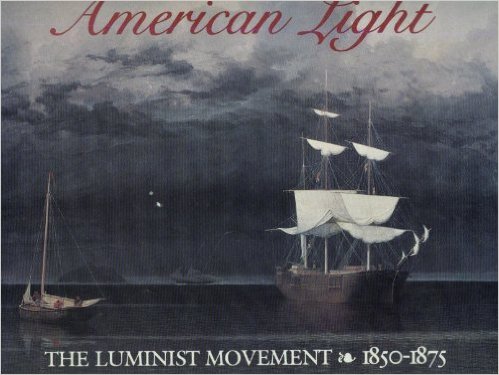 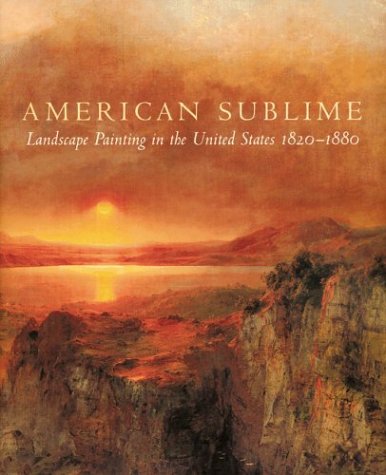 This final piece repeated a lot of what I have already written about the expeditions west, but there was something extremely interesting in how this book had been used. 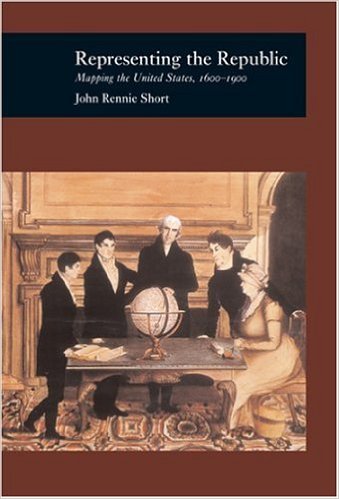 John Rennie Shorts’ “Mapping the National Territory” chapter in Representing the Republic: Mapping the United States 1600-1900  was heavily annotated by someone who used it before I did, but only in some interesting places. Actually what was most interesting was where there weren’t any annotations. 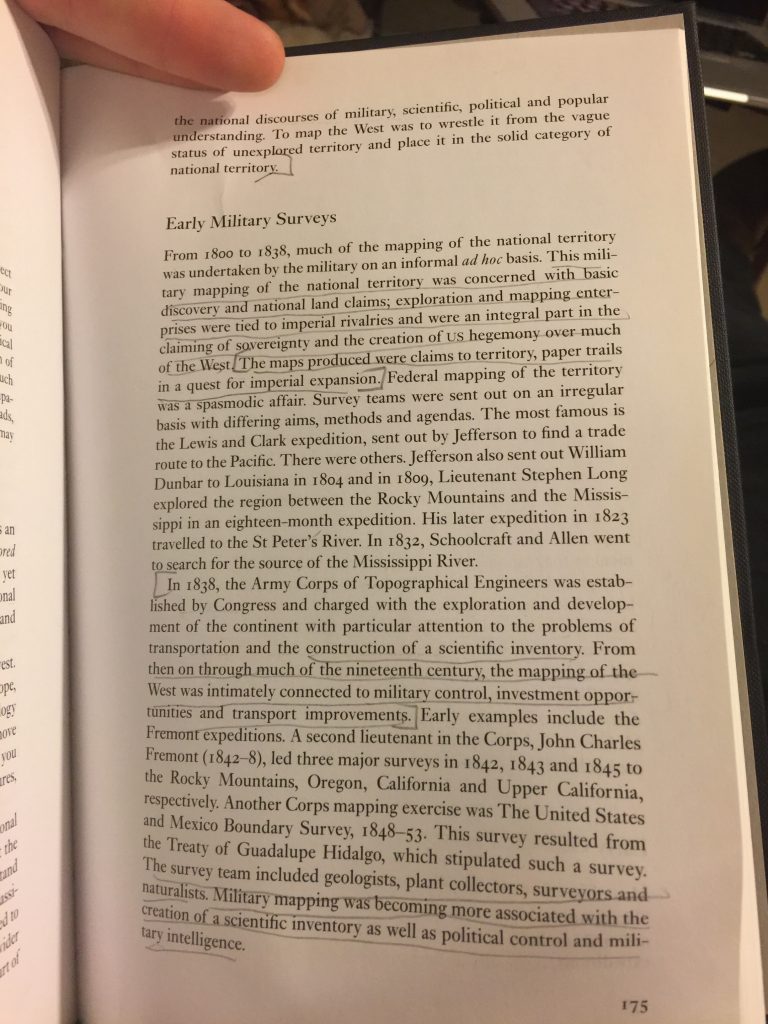 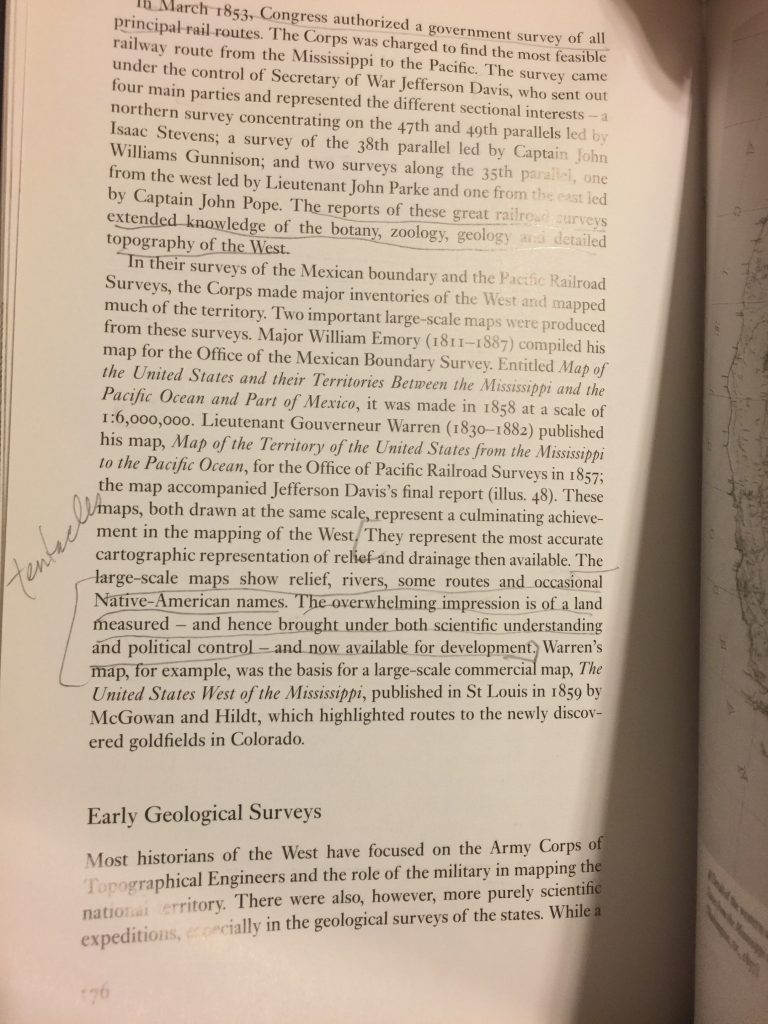 As long as the book was recapitulating the same stories on the expansion and expeditions by the government the previous patron filled the pages with notes. Once the book started talking about the geological surveys: nothing. Well, almost nothing, there were two sets of brackets. Even as the book stated that little attention was paid to scientific surveys–even though they made up 80% of all the surveys were scientific in nature (mostly geological). 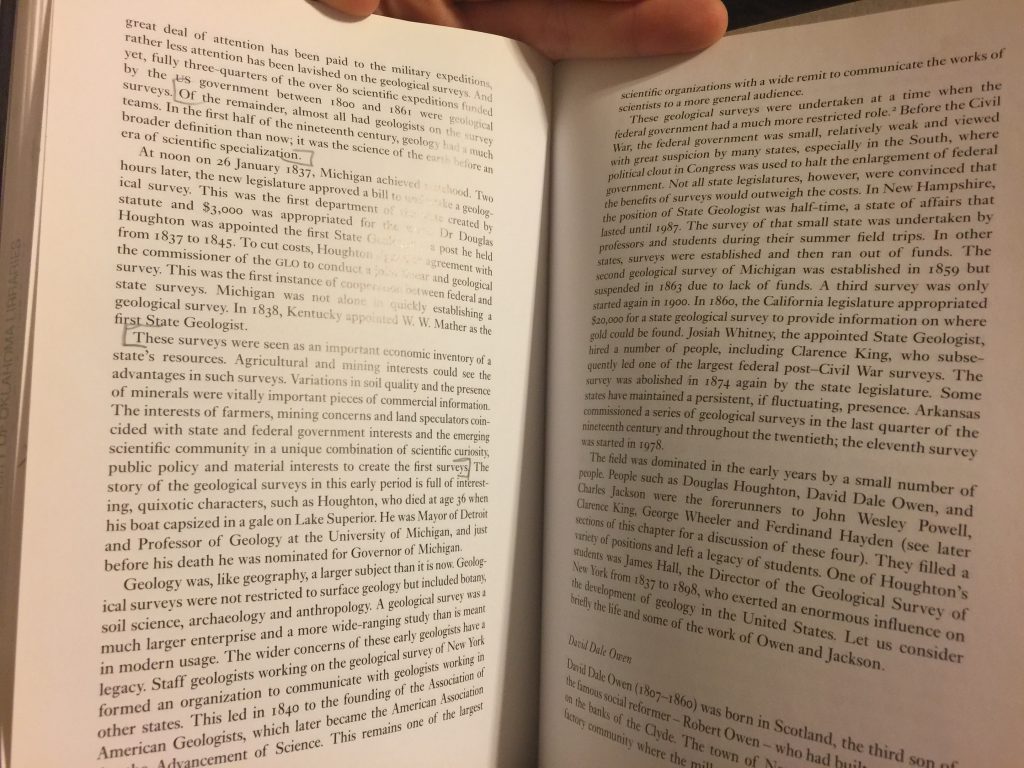 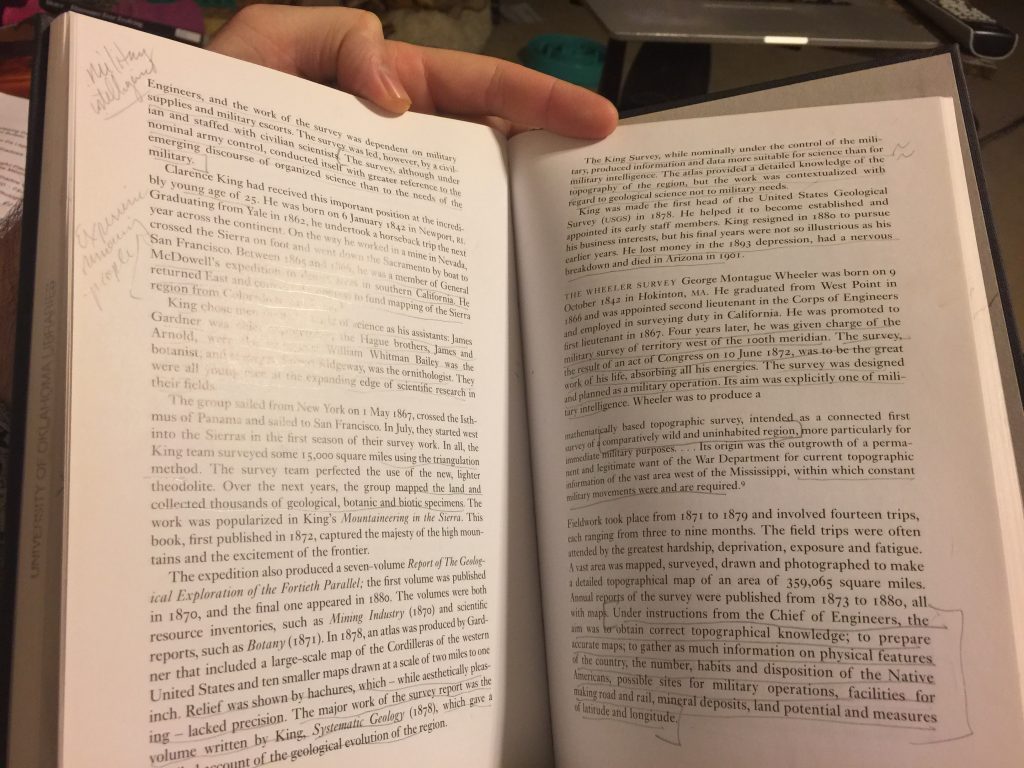 All this leads me to believe that my dissertation topic is not only interesting but might actually end up being useful to a couple of fields.  One more section and a few more books and I have completed this part of the journey, the next post will likely be short like this one since the remaining texts are larger works as well with only portions aimed at my topic and it is hard to review/synthesize a textbook outside of its content’s context which has most definitely been carried on  in previous posts. I think these last dozen books or so are just the mopping up portions in order to hammer home some of the larger points and make sure I have been paying attention all this time. If any of this stuff was new and revolutionary at this stage I would most likely be extremely worried about my progress and exams.