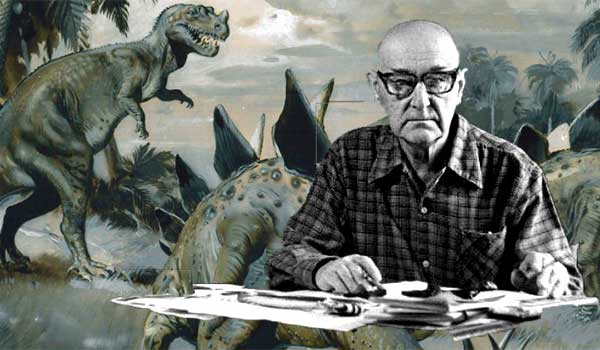 There will not be any more information here than you can learn on Zdeněk Burian’s wikipedia page, but what I have done is compile as many of the loose plate copies from his works that they are selling on ebay and dropping them into a giant album of varying resolution. I have also ordered a couple of his books that haven’t been translated and was going to wait until the arrived to post, but they haven’t even shipped yet. Burian’s work is as iconic as anything the Charles Knight produced and includes many mass market non paleontological book illustrations such as Tarzan and Robinson Crusoe.  There was an interview published online just this past November that has some more biographical stuff about Burian. The original (where I pulled the featured image of the artist) is here, if you don’t read Czech you can work on the Mad Gab that is translated by Google here, it should be good enough to give you a broader sense of his work. One of the things that I wanted to include here actually folds back onto my work on the paleoart of Ralph Shead. When the paintings were finally found one of them seemed out of place for Ralph’s style. In fact his great-nephew Bill was sure it wasn’t his because of it. With the name broken off now, all we had to go on was that the guys who worked with it on the break room wall was all certain it was by the same guy, and that Shead was the only museum artist. While I was pulling the images from a series of Ebay auctions selling one page at a time I stumbled across the answer: both are correct. It *was* a Shead painting, but it *wasn’t* his style. This is because it was a copy of a Zdeněk Burian piece.

I am hoping that one of the books that I have coming that contain colored images will have the colors of this one.

Burian’s work is prolific as well, a simple Google Image search will spread before you the breadth of his work in time, species, and publication. as well as an interview done in a museum which I assume is in Prague(?) You don’t have to understand Czech to enjoy the amazing pieces on display here, but if you do you will be able to get more info about Burian.