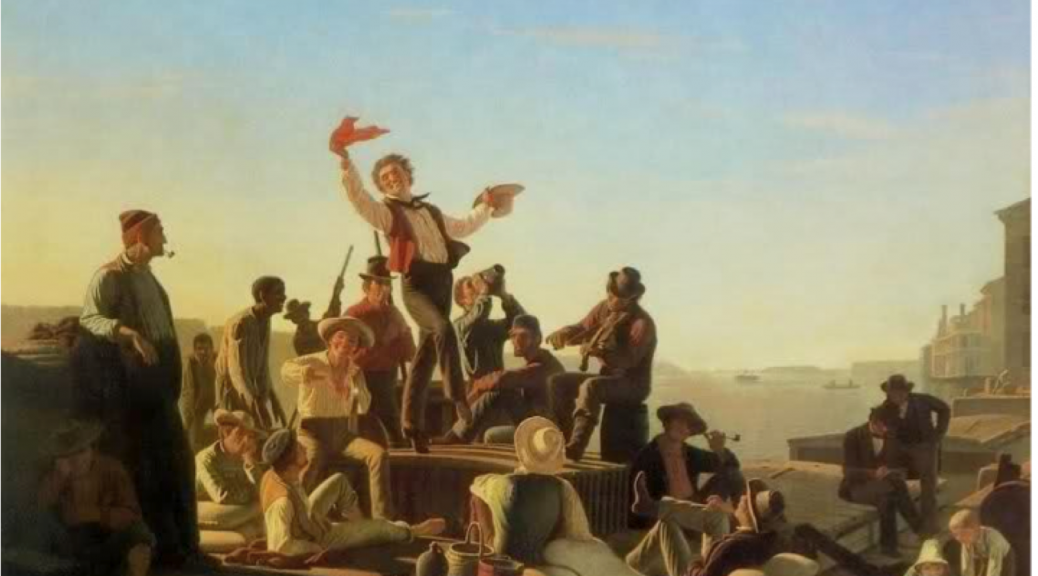 Art and the American West is the most recent undertaking of my long and checkered career as an academic. Since finishing my MA in the History of Science, Technology and Medicine I have spent a great deal of time in our Art History department learning ways to tie in the  arts to the American cultural studies that I seem to have fallen into in recent years.

The greatest benefit to getting into a program at this late in the game is that you are still interested in the topic and it hasn’t been completely scraped from your soul by years of arguing theory. I have always said that the surest way to remove any of the joy in literature is to study it at university. The same can be applied to art.

Since I have been involved in the courses or the last two years, the three intro books on my list are excellent reviews for stuff we’ve talked about in class. In class we spent more time with articles and visual analysis and less with the broader portrayals and involvement of the artists, art (as object), and art (as culture) within their historical context. This is also the same field that led to the more structured development of this blog and eventually the webpage where it lives. Many of the individual artists that will come into play in the future posts will be linked back to my first art history works that used some of the books in the series as part of the courses I was taking.

From what I have been working on, I find it is completely impossible to understand the antebellum period in American history without understanding its art. All of these overview books are collections of essays that isolate major themes and then reapply them back to the larger American Cultural landscape. 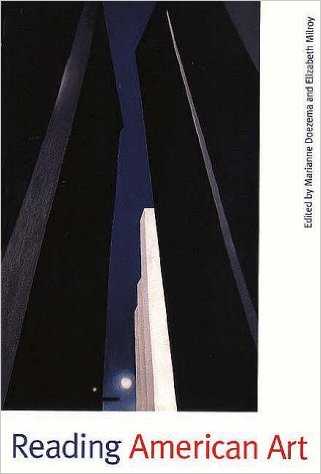 Reading American Art (Marianna Doezema and Elizabeth Milroy) offers a handy collection of American Art and their interpretations through the academy and through time. The survey runs from the colonial period through to Jackson Pollock. For my purposes the usefulness of this collection comes from the analysis of the early 19th century establishment of art as American. There is much lamentation over the fact that Americans had little pride in their own form of art. The hardest question to answer or explain is the schizophrenic nature of early art in American that needed to prove it was its own thing while striving to make it work on European terms. Political history sets up the development of this art form less in manner of than artists and more in the manner of the artists’ patrons. Whigs and Democrats in the early to mid 19th century were both striving to arrange the new Republic in a manner that benefitted their constituency. The lack of any actual aristocracy and the expansion os suffrage to those who did not own land drove the Whigs to seek control over American culture where it had lost control over American politics.  Instead of calling themselves Dukes or Lords, they opted for the title of patroon and shifted to constructing reflections of American culture through their patronage of early American artists. 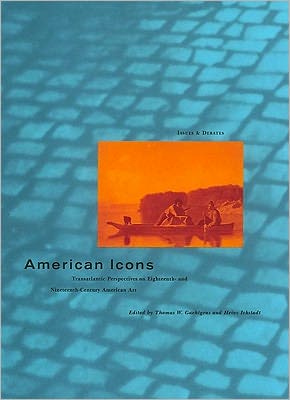 American Icons (Thomas W. Gaehtgens and Heinz Ickstadt) is a larger format and, frankly, easier to read version of Reading American Art. The essays are all arranged from a comparison perspective between American and European art. Many of them are comparing the differences in the American arc from those of their European counterparts. Save one. William Hauptman’s essay “Kindred Spirits: Notes on Swiss and American Painting of the Nineteenth Century” looks at the parallels with Swiss and American art, most notably the fact that national artists had to leave the nation (Switzerland or the US) in order to make their names and (however measly of) fortunes in the art world. The most interesting aspect beside the timing is the cultural arrangement of Switzerland that can be used to illuminate that of the American side. With a population less than that of New York of City, Switzerland was self divided into regional cultures that “shared more differences than similarities” and led to a multifaceted emergence of “Swiss” art. (Contrary to popular belief Swiss art is not art that is full of holes). 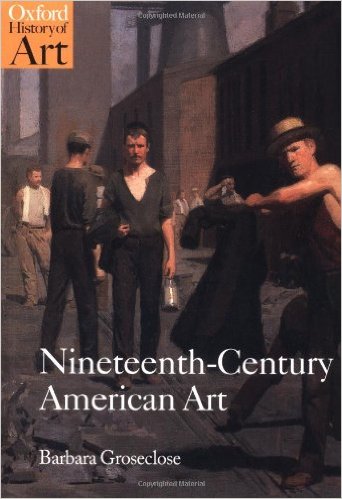 Finally, Barbara Groseclose’s Nineteenth-Century American Art is part of the Oxford History of Arts series and is filled not only with useful chapters and asides, but with further reading and sections on which museums to visit to see some of the famous collections of American art. As with the others, Groseclose starts American Art in Boston and follows it through the development of art unions as “culture” spreads through New York and Philadelphia. One of the strengths of this book is that was published with most of the art images in color. Even Reading American Art which sold itself on being a collection of essays intended to remove the need for bad photocopies of articles and aides for teaching class was published without colored images.

These intros all serve to orient oneself in the larger field of American Art History as it pertains to the Antebellum period which all have mentioned is a bit of a black hole of art history theory (which I think is one of its strong suit) even as it proves to be more important for the development of the culture of the young Republic than it at first seems. You can’t separate early American history from early American Art History and have either make any sense. Many of the artists that have works in this books were mentioned by name and covered in the books of the previous posts. Even those like John Haberle, and William Harnett who aren’t as famous as Bingham, Bodmer, or Bierstadt (who ironically, may not be that popular either given the number of times these authors talk about the obscurity of American artists in the 19th century.  These early collections and studies from the mid-late 1980s all remark that this period in Art History has fallen under that research of American Cultural History and American Studies departments which means I have been on the right track trying to put it all together to understand a more complete America during the long 19th century.

I will end this with the same thing I tweeted when I finished the last book: “It should be illegal to publish black and white images of colored art works in art books.”