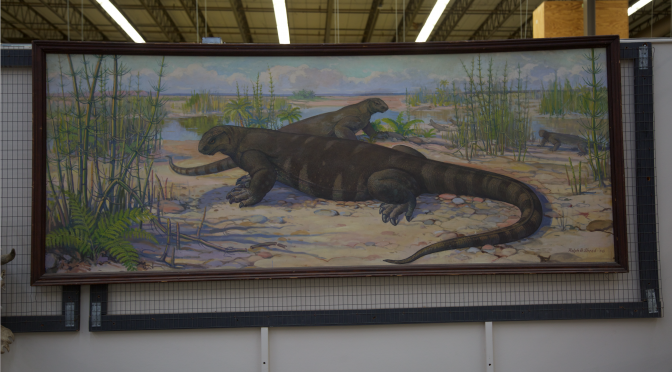 The conclusion of this painting’s 700 mile 20 year round trip is a fitting end to this series of my work and I feel like my summer projects have been finally completed.

A quick backstory on the painting’s subject in case you are catching up on this at the end: The cotylorhynchus is an early Permian synapsid that was first described by OU’s own J. Willis Stovall in 1937. The species name for the specimen found just north of Norman is Romeri for Alfred Romer (1894-1973), the founder and first president of the Society of Vertebrate Paleontology which now grants the Romer Prize to predoctoral students for work excellence of scientific value and oral presentation at SVP’s annual meeting.

Shead’s 1938 painting is the first attempt at depicting the animal in life and while there are many issues with the interpretations by today’s standards, it stands as a testament to his skill as an artist and the importance of paleoart, even in the 1930s. The painting itself lived in the Stovall Museum until the time came to move into the new building in the late 90s early 2000.  There are a few different accounts to where it was found initially, leaning up behind a vacant building, next to the trash receptacle, or similar, but either way it was slated to be discarded. Either room or just it’s own out of date representations of science may have doomed it, but thankfully a cheerful passerby inquired about taking it and it was saved. 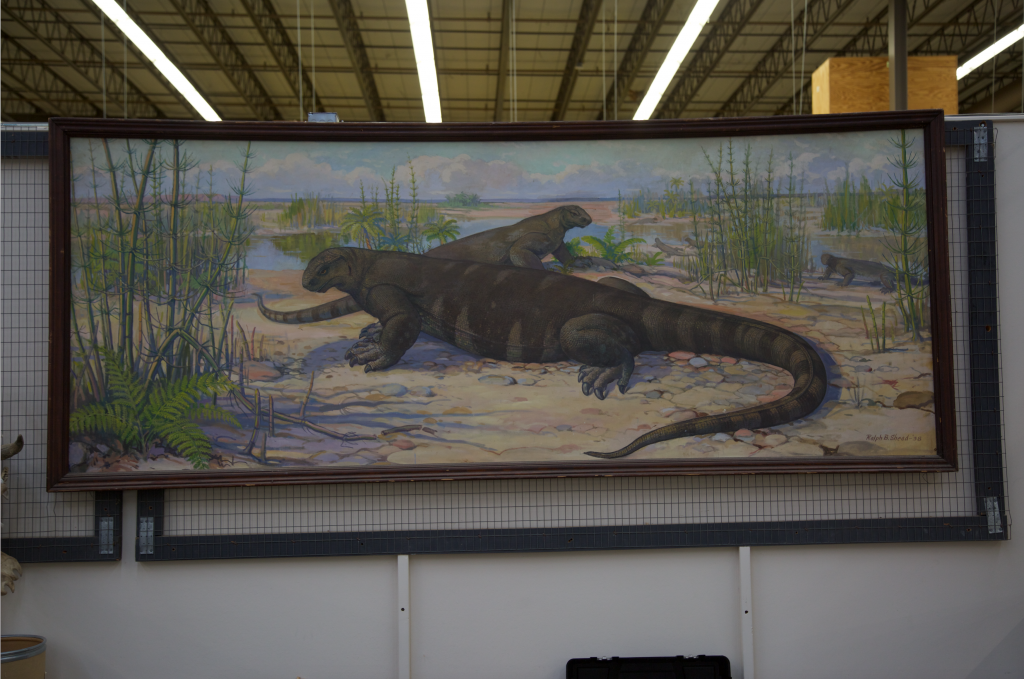 I don’t know the names of any of the parties involved at this point, but at least 2 different stories corroborate what happened next: The painting made it’s way to the finder’s brother who was attending A&M down in College Station, Tx and hung in his apartment until he graduated whereupon he presented it to the Biodiversity Research and Teaching Lab. There the “Komodo Dragons” quickly became a staff favorite. 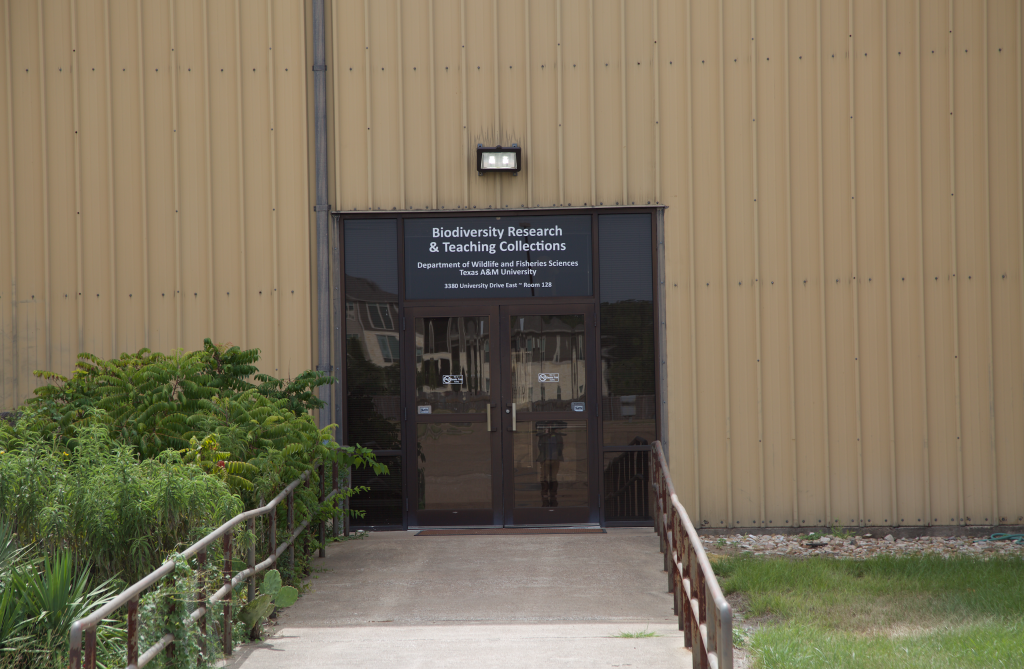 Now, something about this painting if you haven’t made it out by this point is it’s size. The thing is nearly ten and a half feet long and over four feet tall. This wasn’t just swept away under an arm like a folded newspaper. To relocate this thing anywhere required work, and a great deal of it. 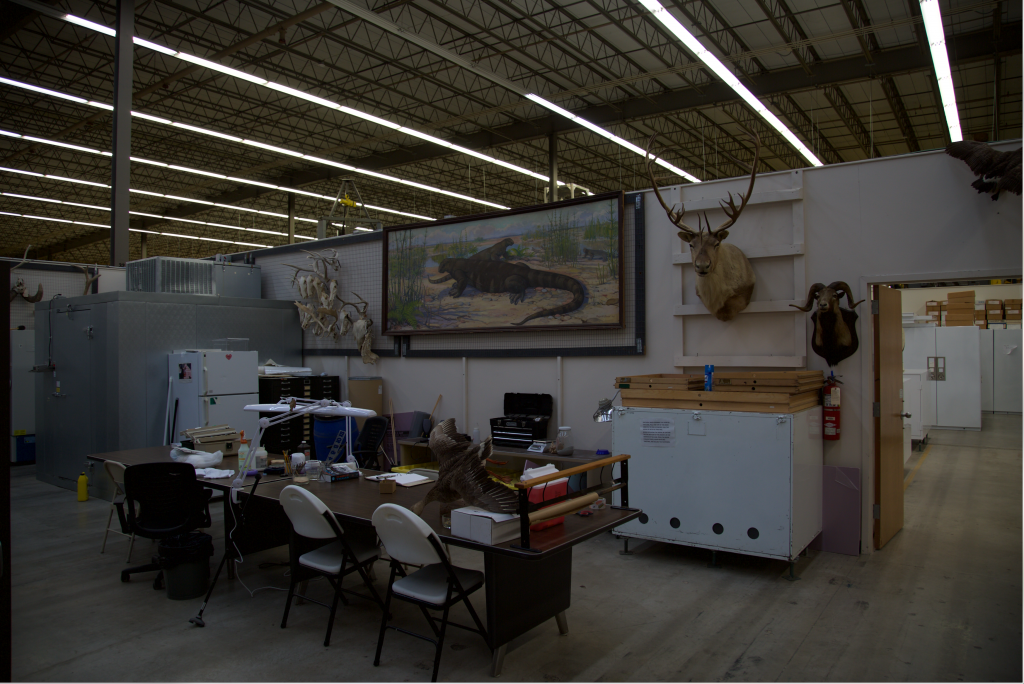 Thankfully the powers that be at the research lab agreed to gift the painting back to the Sam Noble where it now nearly completes some semblance of a “set” of what Shead paintings I have been able to track down. A pickup date was scheduled that coincided with a need to transfer some textiles from another collection on the A&M campus to Sam Noble and we were to initially head down sometime between the 28th and the 30th of August.

Poseidon, not being a fan of art or terrestrial fauna, had other plans. Hurricane Harvey, in addition to the immense devastation along the Texas coast, postponed the painting’s return trip. We eventually rescheduled for September 25th and 26th. 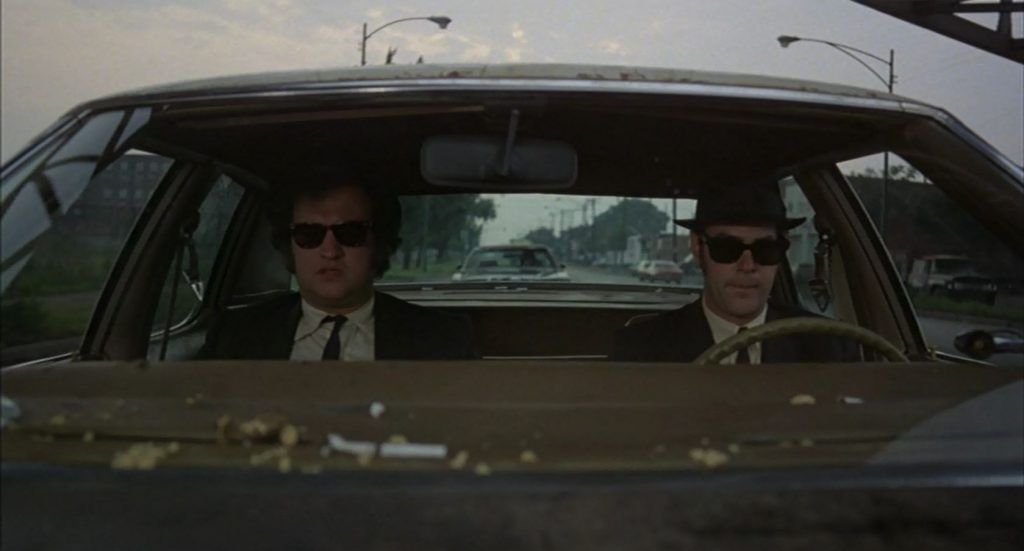 Texas A&M is about 357 miles from the University of Oklahoma and after picking up the rental van and removing what seats we could,  we loaded it with all our packing and strapping and were finally headed south around 10:30 am. 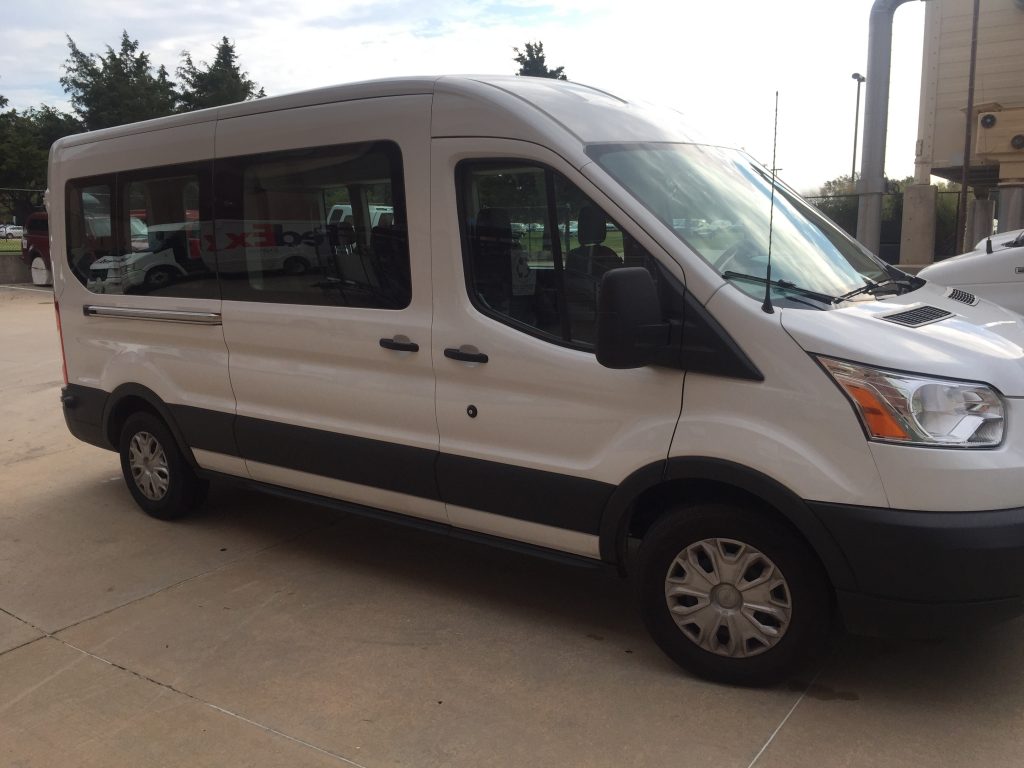 The next morning we met the Biodiversity Heritage folks and prepared to claim the prize. As if making up for the delay, luck smiled on us in the form of a masonite backing on the painting which made if far easier to secure in the van. Some framing, lashing, and a few knots and it was ready to return to it’s ancestral home. 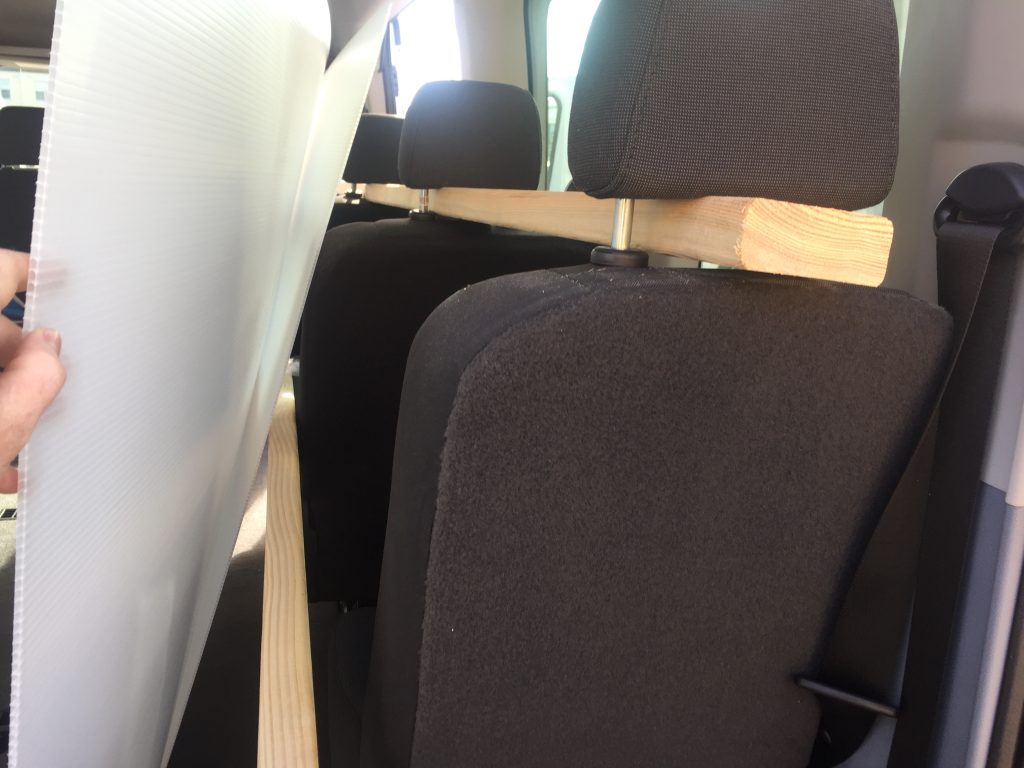 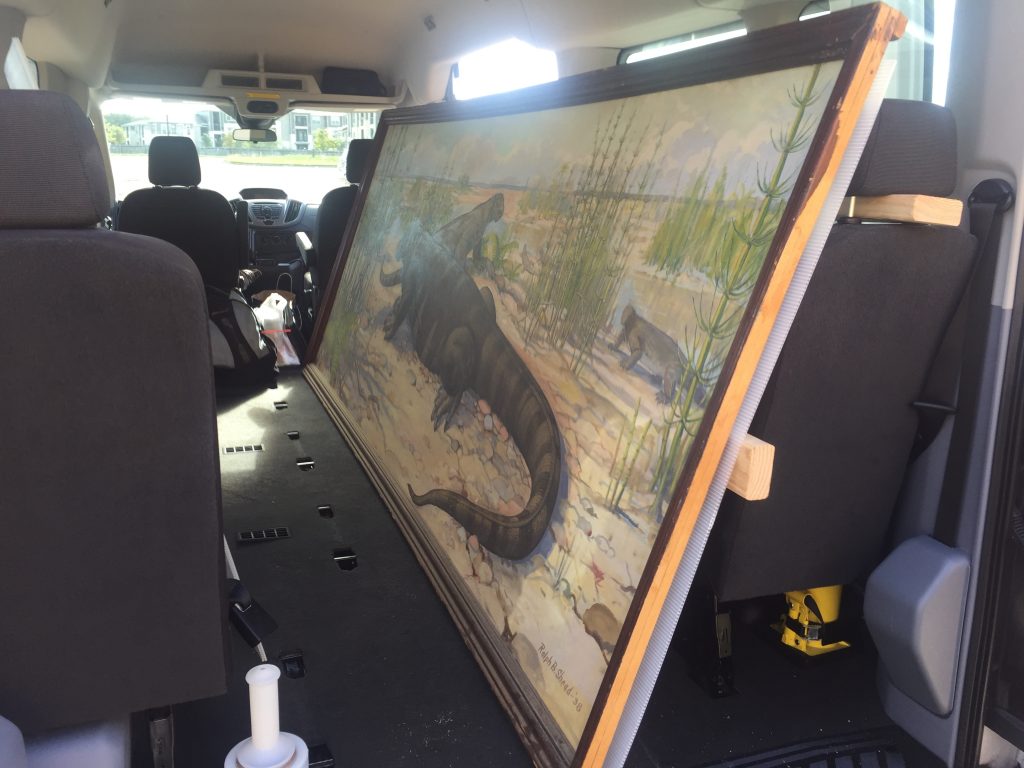 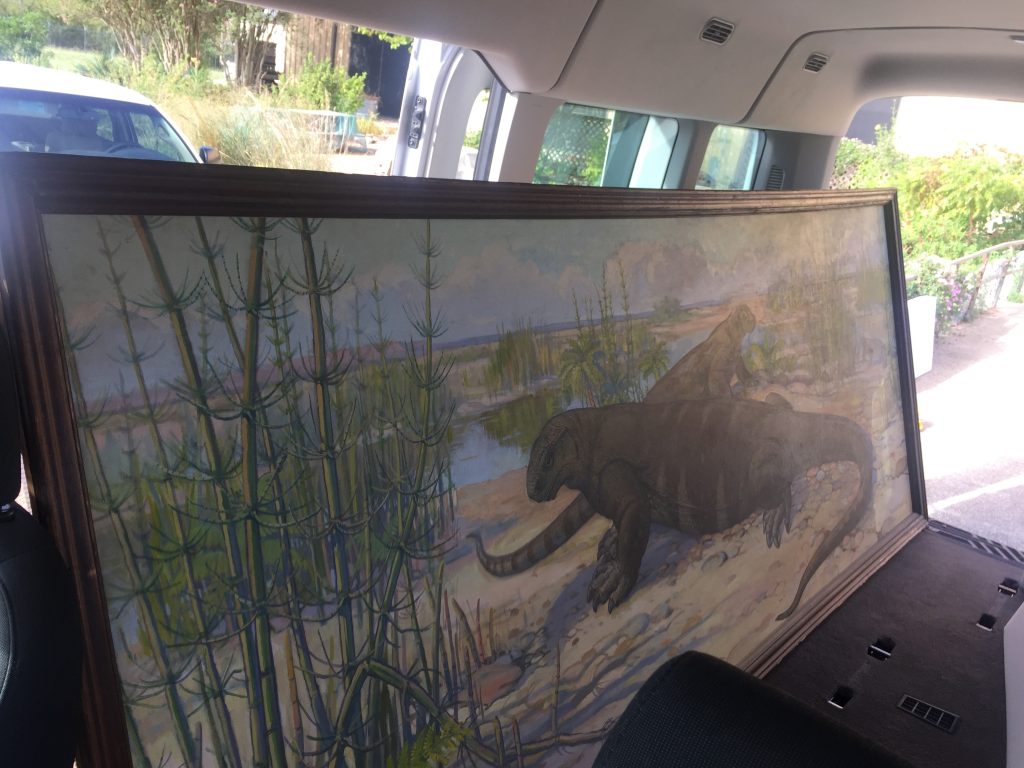 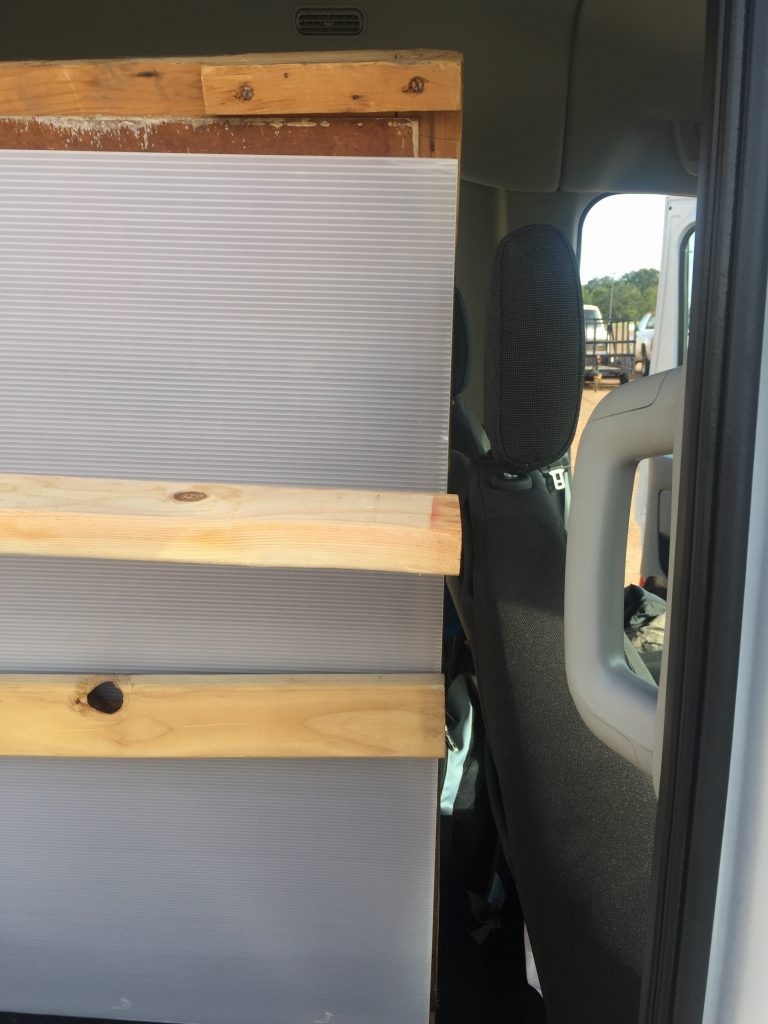 We picked up the textiles across campus and left College Station nearly exactly 24 hours after we have left Norman. We caught a break in the rain bands when we unloaded the cargo and it is now safely in “the bubble” where it will rest in a type of quarantine for a few weeks before getting it’s frame worked on and joining the other wayward Shead paintings. 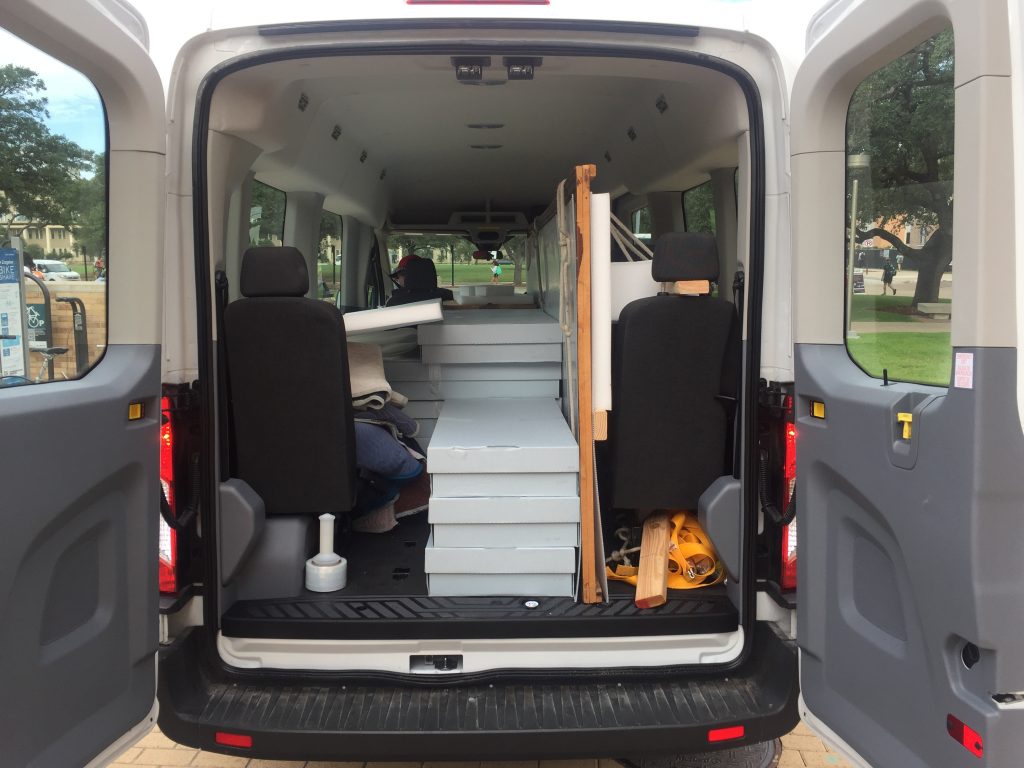 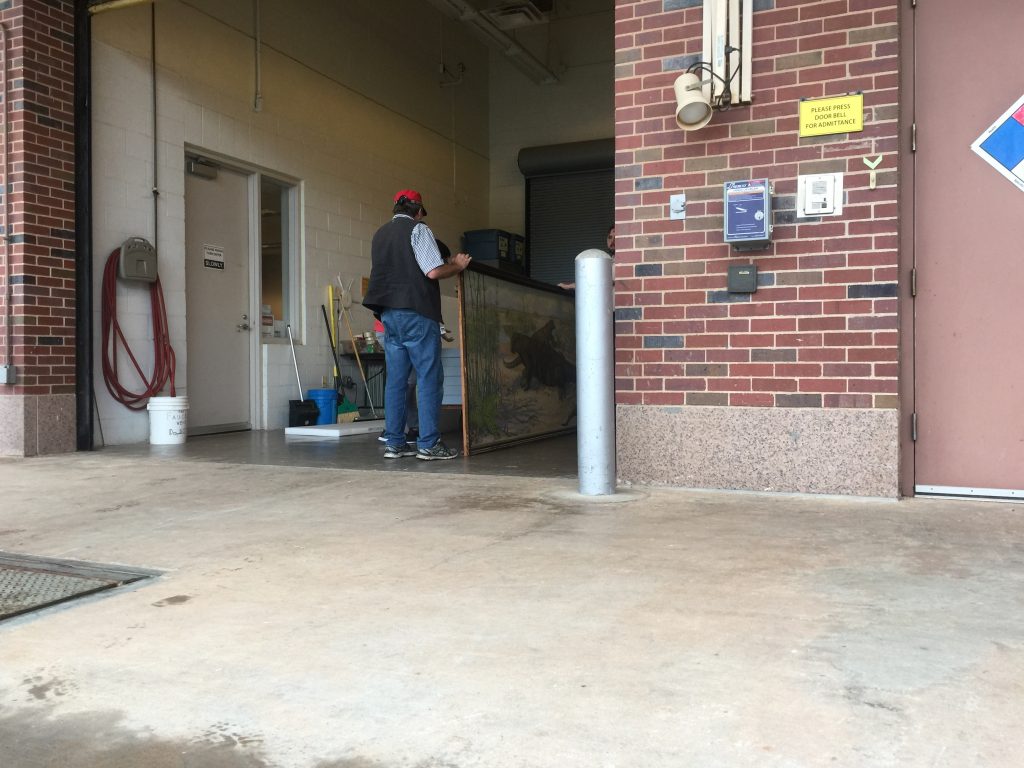 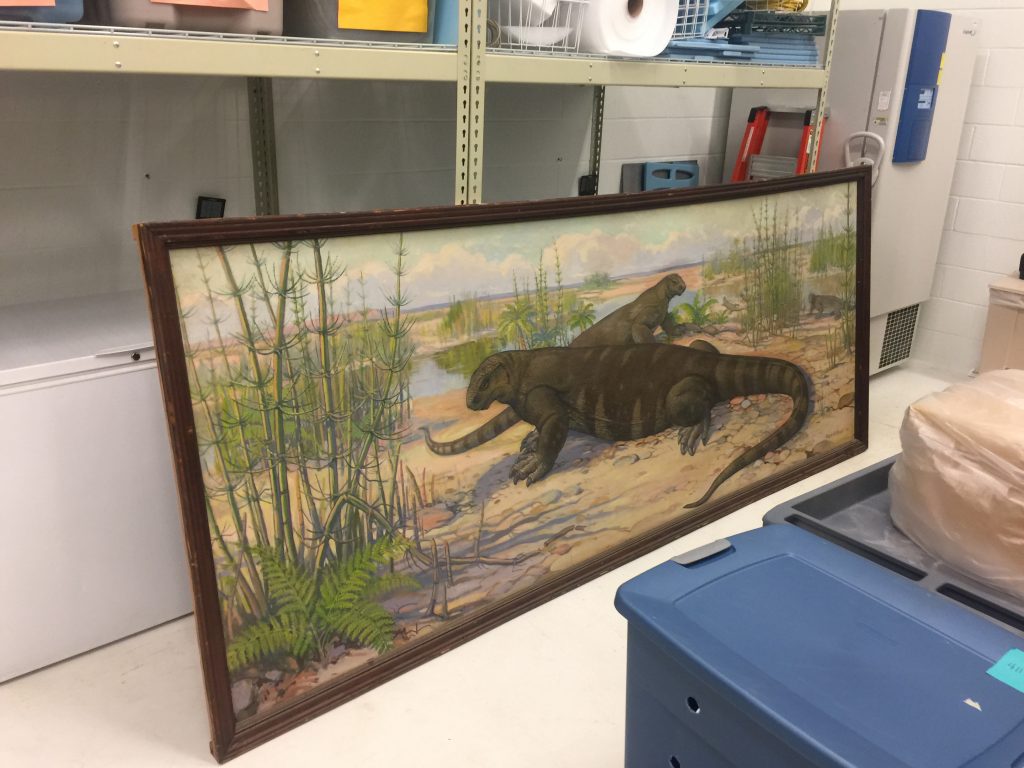 Not only is the Cotylorhynchus Norman’s native son, but it is the only painting of Shead’s that we have a photograph of him painting. I don’t think I could ever thank the wonderful folks at A&M enough for agreeing gift it to us. To think that it could be displayed with the photograph of the artist at work gives me an incredible sense of satisfaction with how this whole thing has played out.

Seeing just this sampling of Ralph Shead’s work, now nearly all collected back under one roof, is amazing just from the art and the historical perspective. If these enormous works can ever be displayed together in the same room  it would certainly be testament to the power of paleoart and paleoartist–past and present –to still inspire awe in the visitor.

2 thoughts on “Gone to Texas”